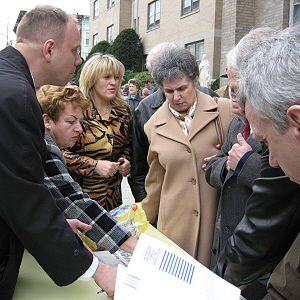 After completing its initial registration drive at Holy Cross Parish in Maspeth, the Downstate N.Y. Division of the Polish American Congress went over to Brooklyn to continue its sign-up of new voters.

Under the direction of the Voter Registration Committee’s chairman, Chris Rybkiewicz, St. Stanislaus Kostka Parish in Greenpoint became the next site for the PAC’s efforts.

Rybkiewicz’s group braved an unusually cold April morning to set up tables on John Paul II Square and greet the Sunday worshipers as they left the church.

Greenpoint became home to many Polish immigrants who were part of Poland’s Solidarity movement that challenged the ruling Communist regime in the 1980’s.  Their courage and fortitude won freedom and independence not only for Poland but also for the rest of Central and Eastern Europe.

“Now that they became American citizens, we want them to use all the rights of their citizenship.  The right to vote in free elections is one of them,” said Rybkiewicz.

The new voters will give New York’s Polish American community a louder voice in public affairs.  “It’ll also be a Catholic voice,” he noted.

Rev. Jan Urbaniak is pastor of St. Stanislaus Kostka Church. He and Rev. Roman Gorowski reminded their parishioners of their obligations as American citizens and voting is one of these obligations.

The Congress got a lending hand in their registration drive from the Polish Scouting Organization Harcerze.