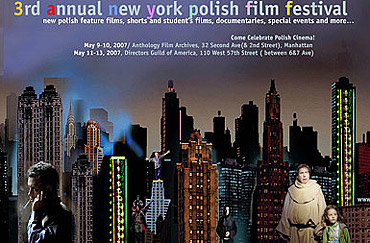 FILMART, in association with The Kosciuszko Foundation, The Association of Polish Filmmakers, and the Polish Film Institute, presents: Third Annual New York Polish Film Festival - MAY 9-13, 2007

The 3rd Annual Polish Film Festival in New York is organized under the honorary patronage of Kazimierz Michal Ujazdowski, Minister of Culture and National Heritage of Poland, and Joseph E. Gore, Esq., President and Executive Director of the Kosciuszko Foundation. The Festival will present the best of the most recent Polish feature releases as well as selected documentaries and a variety of short films made by promising students from the world-renowned Polish Film School Lodz, and the Andrzej Wajda Master School of Film Directing in Warsaw. Among the films selected for this year’s NYPFF are: