The First Polish Immigrants (They were here before the Pilgrims) 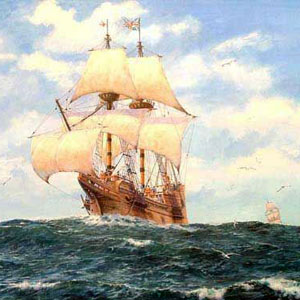 By the time the Mayflower landed, in 1620 at Plymouth, Massachusetts, a group of Polish artisans had been hard at work in Jamestown, Virginia, for more than 12 years. A full year before the Putitans' arrival, the Poles had helped to establish the democratic process in the New World by staging America's first labor strike.

Captain John Smith, the colony's leader, saw early on that in order to survive, Jamestown had to do more than just feed itself. It needed to produce goods that could be exported and sold at a profit.

The new land had an abundance of pine trees whose sap could be tapped to produce valuable pitch, tar, resin, and turpentine. Smith knew exactly where to find men skilled in the manufacture of these commodities. The captain had spent some time in Poland and was familiar with the flourishing pitch, tar, and glass industries there. So it was to Poland that he sent his request for artisans.

The first Polish immigrants arrived in 1608. They were probably indentured servants, which meant that in return for their passage to America, the men had agreed to work for the colony for a certain number of years.

Smith praised the Poles as hard workers and took note of the fact that two of them had saved his life when he was attacked by Indians. The doughty captain was probably thoroughly surprised, then, when the Poles went on strike.

In 1619, as the colonists were preparing to elect members of the Virginia assembly, the new governor announces that only men and women of English origin would be allowed to vote. The Poles, having already repaid their debt of indenture, responded to this announcement by laying down their tools. If they couldn't vote, they said, they wouldn't work. This refusal to work was the first such action in the English colonies and a bona fide American milestone.

Their startling demand was quickly met, and a democratic precedent was set. The court record of the Virginia company for July 21, 1619, puts it best: "Upon some dispute of the Polonians in Virginia, it was now agreed...they shall be enfranchised and made as free as any inhabitant there whatsoever."

- This article was published in the Long Frontier Newspaper