Nazi Invasion in 1939 Began WWII and "Big Lies" Against Poland 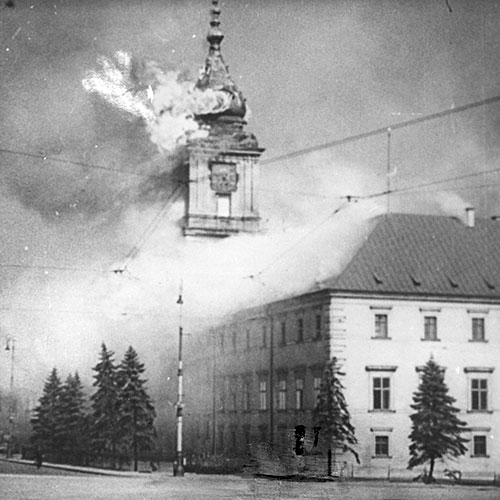 Brooklyn, NY. “Tell a little lie, no one will believe you. Tell a big lie, everyone will believe you.” This was a World War II statement attributed to Joseph Goebbels, chief of Nazi Germany’s Ministry for Propaganda. And the more you repeat it, the more believed it becomes, according to his theory.

It was no wonder, therefore, that the Germans carefully planned and executed a “Big Lie” event just before they invaded Poland 75 years ago on the morning of September 1, 1939. Hitler hoped to trick the world into thinking Poland committed an aggressive act against Germany and, as a result, Germany’s military retaliation would be considered a justifiable defensive action.

It was a “false flag” operation where the Germans themselves faked an attack on a German radio station near the German-Polish border and made it look like an attack by Polish soldiers.

The Germans took some prisoners from one of their concentration camps and had them put on Polish military uniforms. They then shot these prisoners and left their Polish-uniformed bodies at the scene to make it look like an unsuccessful Polish attack on the station. The bodies were to be “proof” the Poles were responsible.

The phony attack is known as “Operation Himmler,” named after the infamous head of Hitler’s concentration camps and one of the masterminds of this devious anti-Polish plot.

The 75th anniversary commemoration of the start of WWII will be observed throughout the world. New York’s Polish community and the Downstate New York Division of the Polish American Congress will participate in an 11:30 a.m. memorial mass at the Roman Catholic Church of St. Stanislaus Kostka located at Driggs Ave. and Humboldt Street in Brooklyn’s Greenpoint section on Sunday, August 31st.

World War II lasted six years and ended with the surrender of Germany and Japan in 1945. For Poland, unfortunately, it is frequently considered a 50-year war and occupation with the Red Army remaining in Poland until the fall of Communism in 1989.

With the German Ministry for Propaganda controlling the wartime news about Poland, getting the truth about conditions there was difficult. The Goebbels technique of slandering Poland apparently was so effective that, even today, the Polish American Congress continues to contact leading American newspapers and other media to advise them Hitler’s death camps were German, not “Polish.”

And, as recently as last year, German desire to blame Poland, instead of themselves, for wartime anti-Semitism became evident when Germany’s TV industry produced the Holocaust drama,” Our Mothers, Our Fathers.” The show attempted to pin the label of anti-Semitism on Poland’s wartime Underground Resistance Home Army, the largest and most effective anti-Nazi resistance in all of German-occupied Europe. It had limited movie exposure in the United States under the title, “Generation War.”

For the 50 years (1939-1989) they lived under a Moscow-directed Communist regime, the Polish people quickly experienced why the head of America’s FBI called Communists “Masters of Deceit.” It became obvious the Communist officials of their Moscow-appointed Polish “government” owed their allegiance to a foreign power, not to Poland.

Misrepresentations of Poland’s history, so common today, exist mainly because the Communists themselves originated so many of them.

“Nowhere else is Holocaust history as distorted and as misrepresented as it is about Poland,” is the often-repeated statement of Michael Preisler, an Auschwitz survivor and a past president of the Downstate N.Y. Division of the Polish American Congress.

"War Journal" of SS Officer and Locations of Lost Treasures of World Cultural Heritage
Queen Elisabeth and Prince Philip - 74 Years of Extraordinary Love
76th Anniversary of the Liberation of Auschwitz. Commemoration Broadcast Jan 27, 2021, 10am EST
Szczepan Mierzwa, the Father of the Kosciuszko Foundation
The Polish-Soviet War of 1919-1920 in Western Geopolitics: A Webinar with Piotr Puchalski PhD
Happy Birthday to Tadeusz Kościuszko. The Greatest Polish-American Hero!
Live: "Poland First To Fight" History Conference at the National Press Club, Washington, DC
A Statement on the Smithsonian Documentary about Pulaski’s Skeleton as Female or "Intersex" (hermaphrodite)
Special Tribute to Her Polish Catholic Auschwitz Survivor Dad On His 95th
SEE MORE