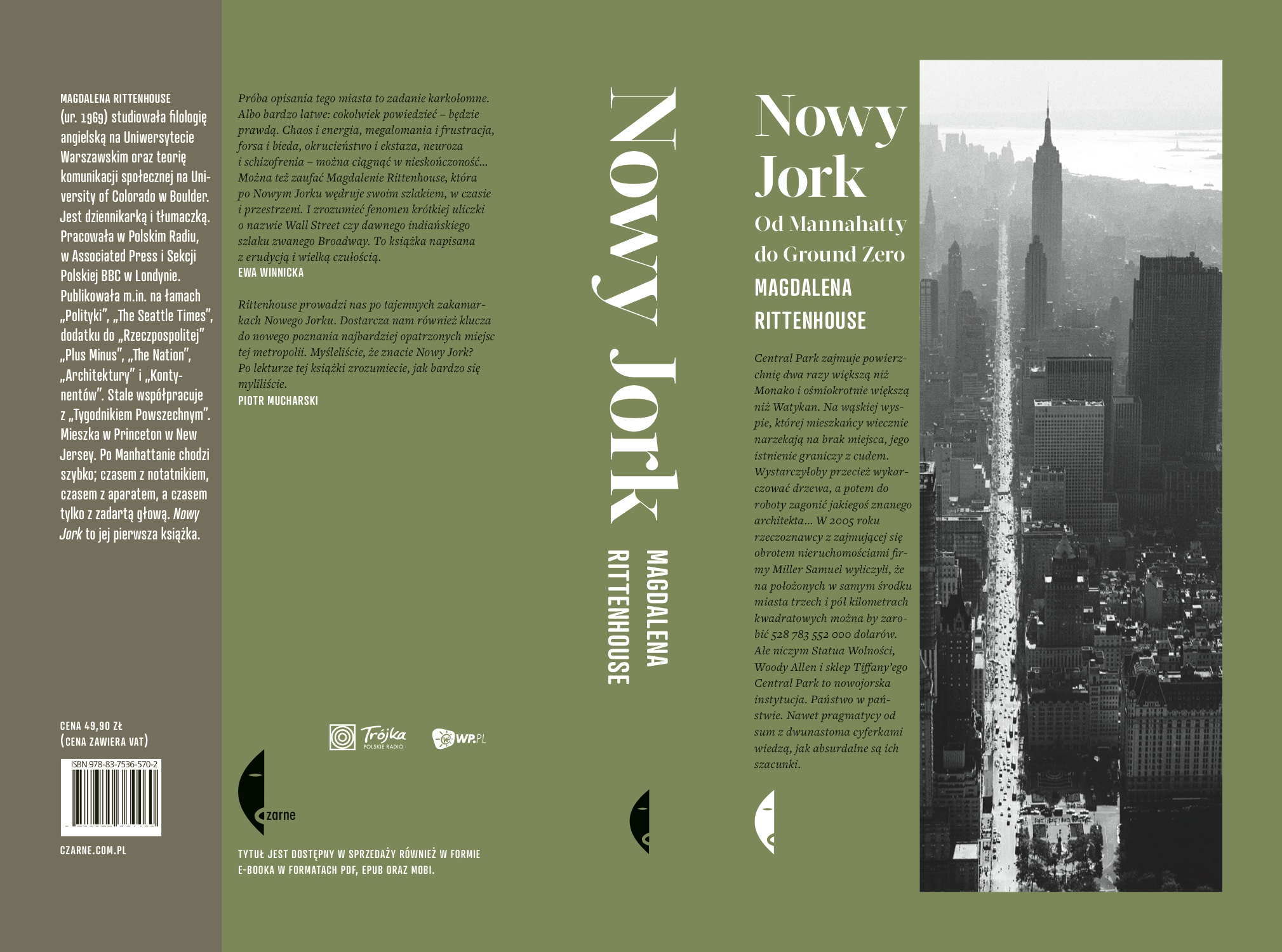 September 12th, at 7 p.m. in support of her book, Nowy Jork: od Mannahatty do Ground Zero.

Discussion hosted by Zuzanna Ducka-Lubas of Nowy Dziennik Polish Daily News. This event will be in Polish.

A story-filled portrait of the vibrant metropolis, New York: From Mannahatta to Ground Zero blends historical account, essay and reportage to produce a companion for a curious explorer. Rittenhouse leads us through the history of the city -- spanning from the voyage of Henry Hudson and the Dutch settlement on the island of Mannahatta to the dazzling billboards of contemporary Times Square and the reconstruction of Ground Zero. Her accounts combine cultural, intellectual, financial and economic history of New York with its architecture and urban planning, fashion and entertainment, religion and politics. Rittenhouse's narration is full of facts yet it embraces the unforgettable energy, diversity, and creativity of Manhattan. As she examines a city full of contrasts, trying to conjure up its atmosphere, she moves back and forth in time, constantly changing her lenses -- looking at wider context, then focusing on minute details of everyday life. Her explorations are organized around themes and places rather than chronologically, as one might experience during long walks. Way more than a standard traveler's guide, it's a great introduction to a fascinating city.

Magdalena Rittenhouse (b. 1969), a journalist, translator and freelance writer currently based in New York. She is published in "Tygodnik Powszechny", "Rzeczpospolita", "Polityka", "The Seattle Times", "The Nation" and others, and has worked for several news organizations, including The Associated Press and the BBC. New York: From Mannahatta to Ground Zero is her first book.

Rittenhouse's book may inspire a trip, may make a trip more rewarding, well, it may even replace it. Her erudition is equaled by her superb style.  (Marek Karpiński, Książki)

Rittenhouse leads readers through her stories with confidence and expertise, she reveals little secrets of the big city with discernment and charm.  (Dariusz Fedor, Kontynenty)

Rittenhouse is searching for a human perspective in the urbanistic visions. While Koolhaas views buildings as manifestations of someone's intentions and aspirations, she actually investigates what happens inside. She subjects his theories to the litmus test of the everyday and provides some kind of evidence, both historical and contemporary. (Paulina Wilk, Magazyn Literacki. Tygodnik Powszechny)

„New York" is such an intense book, so full of interesting facts, suggestive descriptions, so well documented, that while reading it one may feel they are already visiting the city – they will be equally overwhelmed, dazzled, enchanted.  (Grzegorz Wysocki, Gazeta Wyborcza)

Each chapter of Rittenhouse's book made me want to immediately explore a place that she described with such erudition. I like books that make me go out. (Mariusz Szczygieł, Duży Format. Gazeta Wyborcza)