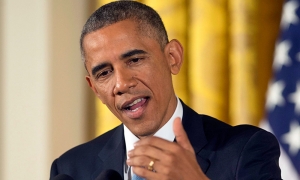 On November 25, the US President addressed immigration issues at Chicago’s Copernicus Center, run by the Polish diaspora

Poland’s inclusion to the VWP was the main topic of Ambassador’s Schnepf meeting with President Barack Obama in Chicago, Illinois.

Speaking with Poland’s Ambassador, President Obama assured Ryszard Schnepf that Poland remains at the center of his thoughts, which is exactly why he selected the Copernicus Center as the venue for his remarks. Additionally, President Obama made it known that he has not forgotten about Poland's Visa Waiver Program ambitions, but as the President explained, not everything can be taken care of at once. Recalling his trip to Warsaw in last June, American President declared once again that Poland as a steadfast US ally will never stand alone.

Speaking at the Polonia-run Copernicus Center in Chicago, President Obama welcomed gathered audience with words “Dzień dobry to everybody”.

Embassy of the Republic of Poland
in Washington D.C.