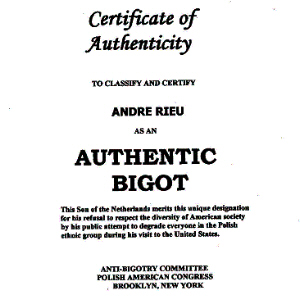 Brooklyn, N.Y. .. Andre Rieu, the stellar fund raiser for the Public Broadcasting Service (PBS), has officially been certified an “Authentic Bigot” by the Anti-Bigotry Committee of the Polish American Congress.

The anti-bias group presented its official “Certificate of Authenticity” to PBS to have the television network forward the document to their somewhat tarnished spokesman who has just completed an extended concert tour in the United States.

Rieu disappointed and alienated many of his fans and followers when he decided to embellish the customary
format of his concerts by including a segment insulting Polish Americans.

Rieu had one of his performers come on stage in a traditional Dutch folk costume wearing her Dutch cap backwards and acting foolish.  Rieu then went over to her and adjusted her cap.  He excused her clumsiness to the audience by claiming, “she’s from Poland.”

When Rieu pulled this stunt in Wilkes-Barre, Pennsylvania, he raised the indignation of the large Polish American community residing there which brought this matter to public attention.

Some of the Polish Americans in the audience were so incensed by Rieu’s crude and insensitive gaffe, they wrote to the mayor of his hometown in The Netherlands in protest.

The mayor of Maastricht apologized for the erratic and offensive behavior of his city’s favorite son and added that he was grateful to the Polish Army who liberated The Netherlands from German occupation in World War II.

In bestowing the title of  “Authentic Bigot” on Rieu, the certificate reads: “This Son of the Netherlands merits
this unique designation for his refusal to respect the diversity of American society by his public attempt to degrade everyone in the Polish ethnic group during his visit to the United States.”