Does this Dutchman think like a German - a German Nazi? 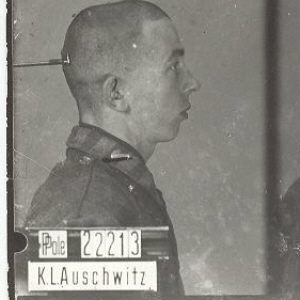 Photo the Germans took of Polish Catholic, Michael Preisler the day he arrived in Auschwitz

Brooklyn, N.Y. ..You really can’t blame an Auschwitz survivor if he gets upset or angry whenever something reminds him of the time the Germans abused and humiliated him while he was there.

Hitler and his Nazis considered Jews and Poles as “untermenschen,” the German word for “subhuman” or “inferior.”  They treated them accordingly --- both verbally and physically.

Michael Preisler of Richmond Hill, N.Y. is a Polish Catholic who got some of that treatment and remembers it well.

The Germans gave it to him after the Gestapo arrested him, beat him and sent him to Auschwitz in 1941 where he remained a prisoner for over three years.

It’s no wonder a shiver went down his spine when he received a letter from a Polish American who attended an Andre Rieu concert in Wilkes-Barre, Pennsylvania on May 15 th.

Mr. Rieu is the Dutch violinist, conductor and composer they sometimes call “Mr. PBS”  because his concert tours are used to raise money for the Public Broadcasting Service and often are televised on PBS. The orchestra he leads is his own and is known as the Johann Strauss Orchestra.

In Wilkes-Barre, Mr. Rieu apparently felt his audience would like some good old-fashioned German humor from the 1940’s, the kind Mr. Preisler remembers well from Auschwitz.  It’s the kind of humor which always ridicules the Polish people.

You could see Preisler turning red as he read the letter from Wilkes-Barre.  It stated, “a number of female cast members walked onto the stage in Dutch folk costumes…One of the women appeared to act ‘stupidly.’   She had her hat on backwards and was acting in a comedic way.  Rieu walked over to her, re-adjusted her hat, turned to the audience and said ‘She’s from Poland.’ ”

Mr. Rieu may have thought his insulting clowning was funny.  Mr. Preisler did not, particularly with Strauss waltzes as background music, the kind of music he recalls the Germans in Auschwitz loved so much.

Mr. Rieu’s Polish-bashing appears to be a planned and permanent part of his act since it was reported to have already been used before.

“If Rieu doesn’t have the sense to understand how cruel and arrogant his joking is, his bosses at PBS better tell him to stop it because he’s their guy and he’s acting on their behalf.” said Preisler.