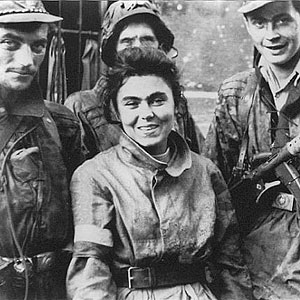 Until CNN aired a special documentary on the Warsaw Uprising of 1944 two years ago, most Americans never knew about the historic battle Poland’s underground resistance – the Home Army (Armia Krajowa) -- fought against superior German forces in an heroic attempt to liberate Warsaw from the clutches of the Nazis who had brutally occupied it for five long years.

In New York City, a commemorative mass marking the 62nd anniversary of the Uprising is scheduled for 12:00 noon on Sunday, August 6th at St. Stanislaus Bishop & Martyr Church, 101 East 7 St., in lower Manhattan. Joining the AK veterans in the religious observance will be the Downstate Division of the Polish American Congress along with other major organizations from the Polish community. The public is invited.

This World War II event is often confused with the Warsaw Ghetto Uprising of April, 1943 which was confined to the Jewish district of the city and on a much smaller scale. While 20,000 Jews were killed during the liquidation of the ghetto, over 200,000 Poles perished in the 1944 Uprising, mostly all of them Catholics.

“It was bad enough the Germans were killing us. Then we realized one of our so-called allies wanted the Germans to kill as many of us as possible.”

This is what Michael Madejski remembers so vividly about the summer of 1944 when the Uprising took place. He remembers it because he was right in the middle of it.

“It could have been a monumental victory for us had it not been for the treachery and deceit of the Soviet army after it arrived at
Warsaw’s outskirts. As our supposed ally, we had expected their troops to cross the river and join our battle against the Germans. Instead, they just sat there and watched us die,” he said.

The two-month battle that began on August 1, 1944 was fought on the city’s streets, from within its buildings and down in its sewers. It ended tragically for the Polish inhabitants of Warsaw with a staggering loss of life. And to make this catastrophe even worse, Adolf Hitler was so enraged by the Polish people’s anti-Nazi revolt that he ordered Warsaw bombed and burned to the ground.

When Hitler invaded Poland in September 1939, Madejski belonged to a Polish scouting group named Zoska. Like so many of the other scouting groups throughout Poland, the Zoska scouts did not disband but joined their elders to fight the enemy.

During the first days of the Uprising in August 1944, Armia Krajowa held a temporary advantage over the Germans. The Zoska battalion seized the opportunity and liberated 350 Jewish prisoners from the Nazi concentration camp Gesiowka inside Warsaw. In recognition of this heroic act, Israel’s Yad Vashem honored the Zoska battalion in 2001.

When the war in Europe officially ended in May 1945, Poland fell under the domination of Communist Soviet Russia with the agreement of the western allies.

For members of Armia Krajowa, however, the war was not over. AK veterans, hated and hunted by Communists during the war years, now became the peacetime target of the Communists who had taken over Poland.

They once had been the backbone of the largest and most effective underground resistance anywhere in German-occupied Europe. Now these Home Army survivors were being jailed, beaten and tortured. Many were executed as “enemies of the state.” This relentless Communist war against the AK would last another 20 years.

All this was combined with a vicious propaganda campaign against the AK “that still lingers to this day,” said Madejski. “Worst of
all, some of it has found its way to the United States and is continually being used to misrepresent the sacrifices we made in fighting the enemy.

‘Most of the Nazis and Communists who were killing us in Poland are dead by now. But, their hatred of the Armia Krajowa seems to have followed us over here and their friends and sympathizers look like they’re doing all they can to keep it alive,” he said.