Poles and Jews aim for a brighter future 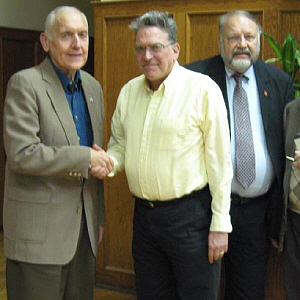 Prof. Robert Cherry of Brooklyn College (2nd from left) accepts thanks from the officers of the Downstate N.Y. Division of the Polish American Congress for appearing as guest speaker at the PAC’s January meeting.

Prof. Cherry discussed his new book, “Rethinking Poles and Jews: Troubled Past, Brighter Future” which examines the existence of anti-Polish prejudice within certain elements of the Jewish community.

Shown with him are (from left to right) PAC President Frank Milewski; Prof. Cherry; Charles Chotkowski, Director of Research of the PAC’s Holocaust Documentation Committee; Richard Brzozowski, secretary of the Downstate N.Y. Division and head of the new Long Island Chapter of the PAC and Anthony Matrejek, the Downstate Division treasurer.

“Poles and Jews began to share their common history some 900 years ago after a Polish king invited them in and gave the Jews a safe haven when other countries in Europe were kicking them out.  There’s been a lot of mud thrown at the Polish people despite this gesture of friendship.  Cherry’s book shows us where a lot of the mud-throwers are,” said Milewski.