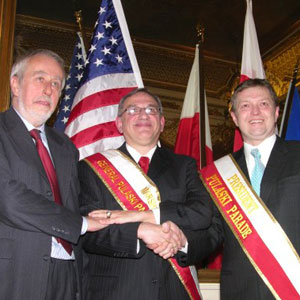 When elected, Peter C. Eagler was humble, modest, deeply honored and delighted to have been chosen the 2008 Grand Marshal. On Sunday, October 5, Assemblyman Eagler will be leading the over 100 contingents from New York, New Jersey and Connecticut up Fifth Avenue in New York City.

The Pulaski Day Parade has been held on Firth Avenue since 1937 to honor the Polish born American Revolutionary War General who was mortally wounded at the Battle of Savannah Georgia in October 1779. This celebration coincides with the national observance by Act of the US Congress and Presidential Proclamation. It is also a day to honor the accomplishments of the Polish People and Polish Americans in all walks of life and vocations.

The official Sash of Honor was presented by past Marshals of the Parade at the Polish Consulate in New York City on Thursday January 17. Representatives from the many contingents as well as over 150 leaders from Polish civic, religious, cultural, fraternal organizations participated.