The Horrors of Auschwitz bind these Polish Catholics Together 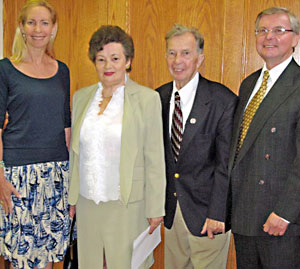 The Children of Polish Christian Holocaust Survivors get two new members as (from left to right) Patricia Kolodziejek and Wanda Deregowska submit their applications to Michael Preisler and Andrew Kaminski to start their membership in the new unit of the Polish American Congress.

The fathers of both women were prisoners of Hitler's SS in Auschwitz as was the father of Mr. Kaminski. Mr. Preisler spent over three years in Auschwitz himself.

As co-chair of the Holocaust Documentation Committee of the Polish American Congress, Mr. Preisler founded the Children of Polish Christian Holocaust Survivors as a way for its members to honor the memory of their parents who suffered through the terror that befell the Christians of Poland during the Holocaust years.

Preisler's daughter, Ewa Preisler-Grabicki, is the  group's chairperson with Mr. Kaminski as her co-chair. She was unavailable for this photo.

- "Nowhere else is Holocaust history as distorted and misrepresented as it is about Poland" - said Preisler, who has devoted many years since coming to the United States to fighting against what he describes as perversions of the truth.

Preisler blames this on the media for their reckless and unconscionable abuse of historical facts and a pervasive anti-Christian bias.

At the present time, most of the activities of the Children of Polish Christian Holocaust Survivors are based in the New York City area.  With divisions and chapters in many states, the Polish American Congress expects its newest addition to eventually attain a nationwide membership.