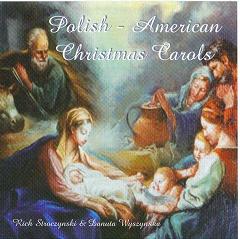 Since the Middle Ages, carols have been at the heart of the Polish Christmas. First known records of melodies and texts date back to the 15th and 16th centuries, some even earlier.

There are two distinct types of Polish carols: the koledy, or church carols; and pastoralki, folk songs also referred to as "€œshepherd"€™s" carols. Both are featured on the new recording.

Koledy, among the most beautiful and moving of Polish carols, can trace their origins largely to monks in cloisters. The hymn "Aniol pasterzom mowil" ("€œShepherds Heard the Angels Say"), for example, is a Polish translation of a Latin carol.

Although both forms are religious in context, the pastoralki are based on lively rhythmic dance forms, such as the "€œKrakowiak" or the "€œMazurka." These lively carols are suitable for family singing around a Christmas tree and at social gatherings such caroling from home to home or at Christmas plays and pageants. Imaginative, their lyrics relate the story of the Nativity through familiar surroundings. In pastoralki, shepherds are the first to greet Jesus, a Polish fiddler lulls the newborn Savior to sleep, and Bethlehem is a village in Poland.

In addition to church and folk origins, many others carols are based on verses and prayers written by Poland's great poets.

"€œThis combination of talent and traditional material makes this CD a winner before the shrink-wrap is removed," said PAJ Polka Magazine editor Steve Litwin. "€œGrowing up with this music and these musicians adds to the spirit of the project; it's one I wholly recommend to all."

Established in 1911, the Polish American Journal is the nation's largest independent monthly Polish American newspaper published in the English language. Each edition contains informative articles by award-winning writers in all fields of interest to Americans of Polish descent, including Book Reviews, Folklore, Religion, Sports, History, News from Poland, Genealogy, and more. A one-year (12 issues) subscription is $20.00.

John Bartley came to Buffalo from Detroit in 1974. Throughout Western New York, he has played a variety of venues, including classical concerts, strolling violin, and a ten-year stint as fiddler in the celebrated "€œHappy Richie's Polka Band."€� Bartley's passionate performances always reveal a frank, instinctive commitment to the music. Bartley performed on the PAJ's Polish Village Christmas CD.

Toledo native Eddie Biegaj has been an entertainer ever since he picked up his first instrument in second grade. This gifted vocalist and musician and has earned himself and his bands recognition from every major polka organization, a Grammy nomination, and scores of awards and honors. The founder of the nationally-acclaimed Crusade, Biegaj has also performed with the Twilighters, Polka Peddlers, Troubadours, and Holy Toledo, and was a co-founder of Polka Motion.
Whether in church as a cantor or behind a concertina at a polka festival, Biegaj's charisma is fueled by his dedication to his music, heritage, family and fans.

Patricia Kaminski Blust has been teaching instrumental strings at Frontier Middle School, Hamburg, N.Y., since 2000. She graduated with her Bachelor's degree in Music Education from SUNY Potsdam and the Crane School of Music, and Master's degree in Music Education from SUNY at Fredonia. A Frontier Middle School, she is assistant director of the fiddle club and co-advisor of the Music Club. Blust teaches cello and viola privately, and has been manager of the Southtowns Youth Orchestra since 2003.

Mitch Biskup was born in Montreal, Canada. After moving to the United States and while in his teens, he became a member of the original "€œGolden Brass" polka band in 1969. The name of the group was later changed to the "€œNew Brass" with Biskup serving as musician, vocalist, composer and master-of-ceremonies. Numerous recordings were produced as the band performed at most of the outstanding festivals and polka events in the country. For his efforts in the Polka industry, Biskup was accorded the highest honor of being inducted into the International Polka Music Hall of Fame in 1995. Although semi-retired from the polka scene, he still enjoys involvement in charitable and promotional events that positively impact the preservation of polka music. His charm and ability to remember names along with his gift of handling a microphone is still remembered throughout the Polka field.

As of the year 2007, Lenny has been a professional musician for 45 years. From being inducted into the International Polka Music Hall of Fame he has received every Polka Music Award possible and has garnered 12-Grammy Nominations. Gomulka has functioned as a studio musician and is heard on more polka recordings than anyone in polka music. He is the proud dad of a beautiful daughter Gina and a little son Teddy who was affectionately named after his Grandpa Ted Gomulka. Lenny enjoys all different styles and types of polka music and is the originator of the "€œPush-Style" polka sound of which he coined the term decades ago. Gomulka has been titled "€œthe most respected musician in polka music today." More on Lenny can be found at www.chicagopush.com.
John Jaworski

In his thirty-plus years of performing, John Jaworski has sung, played, and recorded with such groups as the Keynotes, Chi-Town Express, Stas Golonka, Stas Bulanda, and several more from the Chicago area. His latest recording was as a member of the Three Polish Tenors on Chicago Records. One of his musical achievements of which he is most proud was an old-country style album on which he collaborated and performed with Chet Kowalkowski. It was chosen by the Smithsonian Institute in Washington, D.C. as a recording which best typifies the Polish folk genre. Jaworski retired from the profession of teaching in June of 2006 after 34 years of service. He became a new "€œdziadzia" in February of last year. His family has been his greatest influence in keeping this great musical tradition alive.

Kyle Kohan is no stranger to polkas and Polish folk music. An instrumental music teacher, she studied Polish ethnography, becoming a specialist several years ago in the vast body of Oskar Kolberg's research. Kohan was a member of Buffalo's Steel City Brass for over 20 years and has performed on over a dozen recordings. A board member of the Erie County Music Educators Association, she is also director of the Boston Town Band, and has performed with numerous orchestras in and around Western New York.

Mark Kohan has been performing and recording polkas and Polish folk music for over 31 years, 29 of those as leader of the Steel City Brass. Through the National Endowment for the Arts, the New York State Council on the Arts, and private funding, he has served as project coordinator, producer, and guest artist for numerous workshops, publications, and recording sessions, including the "€œPolkas For Children" recordings. Inducted in the Buffalo Music Hall of Fame in 2003, he is the recipient of numerous awards and honors for his work as a musician, journalist, and historian.

Jim Kucharski has been playing upright bass and bass guitar in the polka business for 20 years. He has performed with many Chicago area polka bands through the years, including Stas Golonka, The Ampol-Aires, Freeze Dried, and many others. Jim is also Program Director of the Polka Jammer Network (www.polkajammer.org), an up and coming Internet polka radio site. This CD mark's Jim's 25th album recording to date.

Jackie Libera has been been performing for 37 years with"€”among others"€”Heavy Chicago, Bay State IV, Jackie Libera & the Classix, and Maestro's Men. He has played on over 20 recordings for these bands and others, two of them were Grammy nominated. Libera was inducted into the IPA Hall of Fame in 2003 and has been a polka radio DJ on WESO in Southbridge, Mass. for almost 40 years.

For over fifty years, the name of Joe Macielag has been synonymous with polka music in Western New York. The leader of the Pic-A-Polka Orchestra is perhaps best known for his television show that aired in Buffalo in the 1960s with polka legend Frank Wojnarowski. Macielag and the orchestra has performed across the United States and Canada. The band's three recordings are considered among the best Eastern style polka recordings to come out of Buffalo. He is a past five-term president of the Western New York Division of the Polish American Congress, Inc. (PAC) and presently is a National Director of the PAC. In addition, Macielag still serves as a founding Director of the American Polish Advisory Council, a Board member of the National Polish American-Jewish American Council, and numerous other professional, fraternal, and choral groups. He is a popular lecturer and guest speaker on Polish folk music and history.

Michael Nowakowski has been involved in the polka field for over 40 years. President and executive producer of the Sunshine Label, he was inducted into the Polka Music Hall of Fame in 2005. To Nowakowski's credit, the Sunshine label has had nine Grammy-nominated recordings to date. Nowakowski himself received a nomination in 2002 for his accordion work on Jerry Darlak & the Buffalo Touch band's album "€œLet the Good Times Roll" and again in 2003 with their album "€œPolkas in Black & White." Over the years, he has performed and recorded with such groups as the Modernaires, Dynatones, and Sunshine.

In 2008, Robin Pegg will observe his 40th year as a musician. He began his polka career in 1973 with Matt Wasielewski & the Polka Jets, then moved on to appear with such bands as the Trel-Tones, Invictas, Sounds, Dynatones, Big Steve & The Bellares, and most recently with PhoCus. He has had the pleasure of recording with Li"€™l Wally Jagiello, and has performed with such legendary artists as Marion Lush and Eddie Blazonczyk. He is the recipient of a Grammy award for his work on the recording "€œWalter Ostanek and Friends."

Pegg released two recordings of his own, "€œMe, Myself and I," and "€œGoing Out In Style," which was the first CD ever released nationally by simulcast with 30 polka IJs, DJs, and promoters.
Professionally, he has worked over 21 years in the electronic security industry.

Larry Trojak is a Buffalo-born singer/songwriter who was active in the polka field from the late 1960s until moving to Minnesota in 1989. One of the founding members of the Dyna-Tones, he appeared on a number of that group's LPs and was one of the driving forces behind the groundbreaking LP "€œLive Wire" (Volumes I and II). Today he lives in Ham Lake, Minnesota with his wife Karen and daughters Natalie and Maryssa, heads up his own marketing communications company, and dabbles in the occasional polka project.