When the saints come marching in, look for these three to be in that number 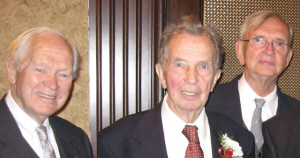 New York, N.Y. Executives at the Wall Street Journal Radio Network in New York City were convinced the best way to right a wrong is to do something right. That “something right” was to publicly recognize the humanitarian ideals of Polish Catholics who saved the lives of Jews in the Holocaust and inviting them to tell their story on the air.

And just to drive home the point, they picked November 1st, All  Saints Day in the Catholic calendar, as the most appropriate time to do it.

What was the wrong?  It was a thoughtless and feeble attempt at a  Polish joke by a careless Wall Street Journal Report announcer which the executives and the Polish American Congress agreed was a foolish and regrettable mistake. The announcer followed his unfortunate remark with an on-air apology.

Broadcast throughout the United States, the WSJ Report turned the spotlight on the three Polish Holocaust survivors shown above and let them tell about their experiences over the WSJ microphones.

And what a story they told.  Paul Wos (left) described the way he and his parents helped twelve Jewish friends escape from the burning Warsaw Ghetto as the Germans were destroying it in April, 1943.  Then they hid them away long enough to assure their survival.

Considering the fact the Germans had an official order to kill any Pole helping a Jew, Israel awarded its Yad Vashem Medal to Mr. Wos and his parents designating them “Righteous Among the Nations.” Michael Madejski (right), was a boy scout when Hitler invaded Poland.

Under the circumstances, even scouts were willing to pick up a gun and defend their country.

In the Warsaw Uprising of August, 1944, when the civilian Home Army (AK) was attempting to liberate the city from German occupation, Madejski  and the other members of his troop, Zoska were able to liberate a Nazi concentration camp holding 350 Jewish prisoners and set them free.

Today, Madejski and the scouts of Zoska are also honored at Israel’s Yad Vashem Memorial as “Righteous” for this unique display of selfless concern for their fellow man.

Michael Preisler (center), endured more than three years of misery and horrors as a prisoner of Hitler’s SS in Auschwitz.
Not only did he survive Auschwitz, he also survived the “Death March” out of there when the Germans started to move the prisoners out to Austria in 1945.

Nearly twenty years ago, he founded the Holocaust Documentation Committee of the Polish American Congress which he presently co-chairs.  His objective is to “set the record straight” about the nightmare the people of Poland lived through after Hitler and his Nazis overran the country.

Preisler feels the Wall Street Journal Report did the right thing by  allowing Mr. Wos, Mr. Madejski and him to “set the record straight.”  It was also their idea to have the survivors tell their story specifically on All Saints Day which he called “a high-class act on the part of the Journal Report.”