The frustrating quest for holocaust truth 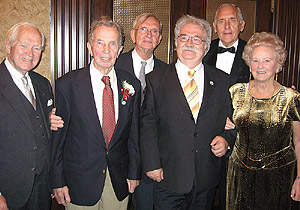 (From left to right): Paul Z. Wos who received Israel’s Yad Vashem Medal as a “Righteous Among the Nations” for rescuing 12 Jews from the Warsaw Ghetto while it was being liquidated in April, 1943. Mr.Wos is a survivor of the Flossenburg

“Nowhere else is Holocaust history as distorted and misrepresented as it is about Poland.” That’s one of the reasons Michael Preisler (2nd from left), a Polish Catholic who survived more than three years in Auschwitz, founded the Holocaust Documentation Committee of the Polish American Congress and is now its co-chair.

A misinformed and antagonistic media, he believes, is behind a lot of anti-Polish bias and his committee has been trying to set the record straight for the last twenty years.

“Historical accuracy often takes second place when the media yield to the temptation to dramatize and sensationalize the Holocaust. They even tried to blame the Polish people for some of the atrocities for which the Nazis and the Communists were responsible,” he said.

During his visit to New York, Prof. Robert Jerzy Nowak, an eminent historian from Poland (3rd from right), noted he also had to grapple with this problem. Prof. Nowak has done much over there to refute false accusations regarding the German crime at Jedwabne and the Communist involvement in the Kielce pogrom.

Shown with Prof. Nowak in the above photo are members of the Holocaust Documentation Committee who attended the October Polish American Heritage Month Banquet of the Polish American Congress in Greenpoint, Brooklyn.