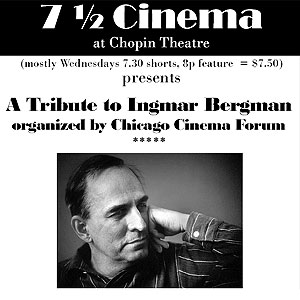 Chopin Theatre is known mostly as an avante garde and international theater. However not many people know that it has also shown close to one thousand different films. And that will increase because of 7 ½ Cinema, the Chopin Theatre-based initiative to regularly present film events organized by different film groups.

7 ½ Cinema's prevailing formula will be of Wednesday screenings at 730p with shorts followed by feature film with tickets at $7.50. On occasion there will some festival-like undertakings with different configurations. Obviously the name 7 ½ refers to Fellini's famous film 8 ½ and Lynee's 9 ½ Weeks.

7 ½ Cinema introduces itself to Westtown with The Bergman Retrospective thanks to Chicago Cinema Forum "a cinesalon hosting laid-back but serious screenings and discussions of seldom seen works" (Chicago Reader). Forum will be also artistic advisor for 7 ½ as well as its primary event producer.

8/12
1-2:45p THE SEVENTH SEAL
Existential film on the journey of a medieval knight and his battle with Death
Intro Alison Cuddy, Senior Producer - Chicago Public Radio