Uklanski & Figura on their "Polish Western" 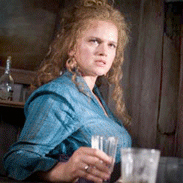 Summer Love (2006), the first feature film  by conceptual artist Piotr Uklanski, appropriates one of American popular cinema's most classic genres –  the Western – to create an allegorical movie. Shot in southern Poland  with a mainlyPolish cast (but with dialogue in English), the film's stock  characters are instantly recognizable to viewers for whom the myth of the  American West is ingrained by the Westerns of the 1950s, 60s and 70s. Yet Uklanski's  film is "a copy of a copy", referring to the European spaghetti  Western as much as to the American 'original'. As Uklanski explains, his  film exploits cinema's most codified genre to address issues of cultural  authenticity. With its impressive cinematography and strong performances,  including an intentionally gimmicky appearance by Hollywood star Val Kilmer, Summer Love functions not only as a conceptual statement, but also as a genuine  Western, adding to the grand tradition of the genre.

...a mock spaghetti western that  manages to be both parody and homage, albeit less western than spaghetti.  Or rather "kielbasa" […] Beginning with its vertiginous opening  shoot-out, Summer Love is characterized by some credibly mad filmmaking.–  Jim Hoberman, Village Voice

Director of photography Jacek Petrycki (who has worked with  Agnieszka Holland and Krzysztof Kieslowski), editor Mike Horton ("The  Lord of the Rings: The Two Towers") (…) make everything look and sound authentic. – Ray Bennett, The Hollywood Reporter

Piotr Uklanski (b. 1968 in Warsaw, Poland), is an accomplished  conceptual artist who has exhibited his work in numerous museums throughout  the world, including the Museum of Modern Art in New York, Centre Pompidou  in Paris, as well as at the Sao Paolo Biennale and Venice Biennale. He  lives and works in New York and in Warsaw. In his photographic works, collages, sculptures, installations, video, and performances, Uklanski uses stereotypical motifs  and strategies from pop culture, art, and cinema to address issues of  cultural identity and authenticity.

THE WESTERN IN MYTH AND METAPHOR
A discussion on the occasion of Piotr Uklanski’s Summer Love
(on view at the Whitney, October 17 - December 9, 2007, Film & Video Gallery, Floor  2)