A night of hot salsa! 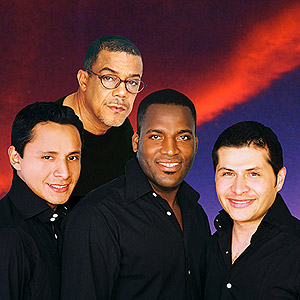 Colombia’s premier salsa band GRUPO NICHE and salsa/world music trombone icon JIMMY BOSCH and his Orchestra will ignite the stage at Lehman Center for the Performing Arts for one night only on Saturday, January 13, 2007, at 8pm. Led by songwriter and vocalist Jairo Varela, Grupo Niche’s bold, Colombian salsa sound has earned the band ten gold and five platinum records. Expect hits encompassing the band’s 25-year career -- from their signature song “Cali Pachenguaro” to their latest CDs, Control Absoluto and Alive. Jimmy Bosch, bandleader, composer, and Bronx resident, whose blazing trombone and Salsa Dura sound have been revered around the world, brings his international acclaim home to Lehman Center.

Grupo Niche was formed in Bogotá in 1980 by songwriter, vocalist, arranger, and producer Jairo Varela, who began his music career at age eight with the group La Timba. Comprised of young musicians from the state of Chocó, Grupo Niche was conceived as new, alternative salsa with a more international style and flavor. Their first album, 1980’s Al Pasito, put Colombia on the map of the world of salsa. After much success in Colombia, Grupo Niche soon earned international fame and in 1986 became the first Colombian orchestra to perform at Madison Square Garden, playing at the World Salsa Festival. In March 1989, they played for a million people at a concert in Peru and in September of that year staged their first European tour, playing in France, England, Germany, Switzerland, and Spain. During the ‘90s, Grupo Niche turned to romantic lyrics, leaving behind their songs based on social issues. The release of Tapando el Hueco coincided with Puerto Rico’s salsa romantica movement, followed by 1991’s Cielo De Tambores and Llegando Al 100%. The band has visited the United States over 100 times, playing for hundreds of thousands of fans, and has performed all over the world. Grupo Niche has released more than 30 albums, receiving numerous international music awards, including a 2001 nomination for a Latin GRAMMY® Award, Album of the Year for Propuesta.

Jimmy Bosch, recognized internationally as the leading salsa/world music trombonist, was born to Puerto Rican parents, raised in Hoboken, NJ and lives in the Bronx. He has been performing professionally since age 13, two years after picking up the trombone. In 1978, while a student at Rutgers, he was hired by Andy Gonzalez to play with Conjunto Libre. Over the past two decades, Bosch has appeared on over 50 recordings and has recorded and/or toured with Spanish Harlem Orchestra, Cachao, Ruben Blades, Manny Oquendo y Libre, Celia Cruz, Ray Barretto, Marc Anthony, Eddie Palmieri, and more. As a composer, he is known for his high-energy, edgy arrangements and powerful, socially-conscious lyrics. Bosch and his band have appeared at the world’s most prestigious venues. CEO of his own independent record label, JRGR Records, his CDs include Soneando Trombon, Salsa Dura, and El Avión De La Salsa.

Lehman Center for the Performing Arts is on the campus of Lehman College at 250 Bedford Park Boulevard West, Bronx, NY 10468. Tickets for Grupo Niche and Jimmy Bosch & Orchestra on Saturday, January 13, 2007 at 8pm, are: $45, $40, $35 and $30 and can be purchased by calling the Lehman Center box office at 718.960.8833 (Mon. through Fri., 10 AM – 5 PM, and beginning at 12 noon on the day of the concert), or through 24-hour online access at www.LehmanCenter.org . Lehman Center is accessible by #4 or D train to Bedford Park Blvd. and is off the Saw Mill River Parkway and the Major Deegan Expressway. Free attended parking is available.
Lehman Center receives support from the New York City Department of Cultural Affairs.