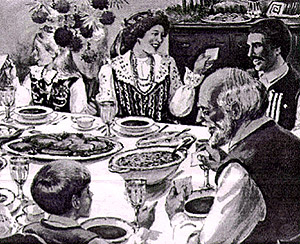 Wesolych Swiat Bozego Narodzenia! That is the way to say "Merry Christmas" in Polish. Among Poles, wherever they are, the most beloved and beautiful of all traditional festivities is that of Christmas Eve. It is then that the Wigilia, or Christmas Eve Dinner is served. It is a solemnly celebrated occasion and arouses deep feelings of kinship among family members.

For days in advance, Poles prepare the traditional foods and everyone anxiously awaits the moment when the first star, known as the Gwiazdka, appears in the eastern sky, for that is when the feast to commemorate the birth of the Christ Child begins.

There is always a thin layer of hay under the white tablecloth in memory of the Godchild in the manger. Before sitting down at the table, everyone breaks the traditional wafer, or Oplatek, and exchanges good wishes for health, wealth and happiness in the New Year. This is such a deeply moving moment that often tears of love and joy are evoked from the family members who are breaking this symbolic bread. The Oplatek is a thin, unleavened wafer similar to the altar bread in the Roman Catholic Church. It is stamped with the figures of the Godchild, the blessed Mary, and the holy angels. The wafer is known as the bread of love and is often sent by mail to the absent members of the family.

The dinner itself differs from other evening meals in that the number of courses is fixed at seven, nine or eleven. According to myth, in no case must there be an odd number of people at the table, otherwise it is said that some of the feasters would not live to see another Christmas. A lighted candle in the windows symbolizes the hope that the Godchild, in the form of a stranger, may come to share the Wigilia and an extra place is set at the table for the unexpected guest. This belief stems from the ancient Polish adage, "A guest in the home is God in the home."

The Wigilia is a meatless meal, no doubt the result of a long-time Church mandate that a strict fast and abstinence be observed on this day before Christmas. Although the Church laws have been revised and permit meat to be eaten on this day, the traditional meal remains meatless. Items that would normally be included in a traditional Wigilia menu include mushroom soup, boiled potatoes (kartofle), pickled herring (sledzie), fried fish, pierogi, beans and sauerkraut (groch i kapusta), a dried fruit compote, babka, platek, assorted pastries, nuts and candies.