25 years later another demonstration at the N.Y. polish consulate 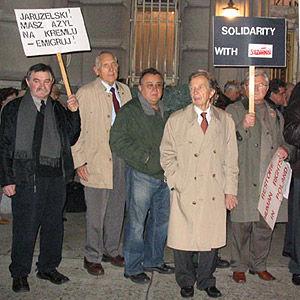 Just as it did during the 1980’s when Lech Walesa and the shipyard workers of SOLIDARITY were striking in Poland, the Polish American Congress again was in the forefront of a demonstration at the Polish Consulate in New York City.

For anyone Polish, that specific date will always be remembered as the day the Communists decided brute force would be the only way to end any thought of freedom and democracy the people of Poland may have had.

It was on that cold and somber winter morning General Wojciech Jaruzelski declared a state of martial law aimed at crushing Poland’s first free trade union SOLIDARITY and nullifying all the concessions the Warsaw regime had previously granted the workers. Polish patriots were hunted down and arrested. Freedom appeared forever lost.

But the dark and dismal mood which prevailed that day in 1981 was a thing of the past for hundreds of Polish Americans who gathered together to observe its 25th anniversary here in New York.

The mood now was one of jubilation and celebration that Jaruzelski failed and the workers eventually won. It had been the inner strength and stubborn determination of the Polish people which brought down the Communist system -- not only in Poland but throughout the rest of Eastern Europe.

They met again in front of the Polish Consulate on the evening of the 13th, a place where many of them came 25 years ago to march and shout, sometimes to sing, to protest the terrorism the Communists used against the Polish population at that time. This evening,
however, it was more like a meeting of old friends at a class reunion than anything else.

“Our demonstrations in the 1980’s intended to show Polonia’s support to the people in Poland in their painful struggle to be free,” said Frank Milewski, current president of the Downstate N.Y. Division of the Polish American Congress.

Leading those demonstrations with him in those days was past president Michael Preisler and Dr. Leon Nadrowski whose fiery speeches against the Communists revealed just how intensely the hearts of Polish Americans were joined with the Polish people.
And after they were arrested, interned and kicked out of Poland by the Communists, SOLIDARITY activists like Zygmunt Staszewski and Andrew Burghardt came to New York and personally took part in the many Polish American Congress demonstrations that continued until 1988. Today, they are members of the Polish American Congress, Burghardt as president of the North New Jersey Division.

After the 25th anniversary demonstration ended, the present Consul General in New York, Krzysztof Kasprzyk, invited the participants inside the consular offices where he hosted a special victory reception for them.
Frank Milewski