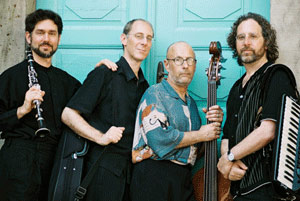 Museum Admission and Hours
The world-renowned New Jewish Music quartet Brave Old World, whose music combines the soulfulness of Yiddish tradition, the finesse of classical music and the vitality of jazz, will perform Song of the Lodz Ghetto, a unique new musical work interweaving Jewish folk music of prewar Poland, rare street songs created between 1940 and 1944 in the Lodz Ghetto during the German occupation, and Brave Old World's own arrangements and compositions. The performance offers a rare opportunity to enjoy soul-soaring, spirit-lifting Yiddishkayt that is simultaneously a universal testament to hope, redemption, and the determination of the human spirit to survive and sing.

The performance is in Yiddish, but now with English super-titles so that all can understand the moving and biting lyrics of Yankele Herszkowicz, Mirjam Harel, Michael Alpert, and other poets.

A CD of this extraordinary work, on the Winter & Winter label, was named Best of 2005 in the World Music category by Billboard Magazine, and was named "Best CD of 2005" by New York's Newsday. Brave Old World was nominated the Best Klezmer Band of 2006 by the Jewish Music Awards.

“..nothing less than brilliant, a recreation that is not merely respectful but stunningly inventive.” – Jewish Week

"This concert grabbed its listeners and wouldn't let go for a long time. The American quartet provoked storms of applause and blew away their audience in the sold-out hall." – Frankfurter Allgemeiner Zeitung

Co-sponsored by the National Yiddish Book Center
Please note that the exhibition, A Blessing to One Another: Pope John Paul II and the Jewish People, is on view at the Museum through February 23, 2007