Eyewitness tells about polish priest who became "the saint of Auschwitz" 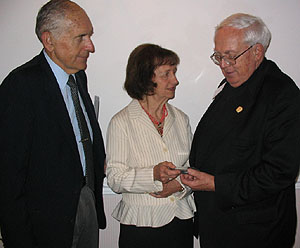 Monsignor Stanley Milewski (r.) Chancellor Emeritus of the Orchard Lake Schools of Orchard Lake, Michigan, accepts an audiotape with the testimony of a former Auschwitz survivor, Walter Szczesniak, who made a recording of it before he died more than twenty years ago.

On the tape, Mr. Szczesniak described his memories of that historic August, 1941 moment at Auschwitz when the Polish Franciscan priest, Father Maximilian Kolbe, volunteered his own life to take the place of another prisoner slated for execution by Hitler's SS.

Shown presenting the tape to Monsignor Milewski are Theresa Bunk, president of the Central New York Division of the Polish American Congress and Frank Milewski (l.) who chairs the PAC's Holocaust Documentation Committee.

The audiotape is a donation from friends of Mr. Szczesniak who urged him and were able to persuade him to record the details of his unique experience at a time when he was visiting them in upstate New York.

Monsignor Milewski will make the tape a part of the archives of the Orchard Lake Schools which have become a permanent repository for numerous artifacts and memorabilia from Poland and the Polish American community.

The Polish American Congress was asked to convey Mr. Szczesniak's testimony to the Orchard Lake Schools since he had been a member of the Congress for many years before his death.

The Germans operating Auschwitz had a special rule whenever a prisoner was able to escape the camp. For everyone who did, the SS guards would pick out ten prisoners and kill them.

After one such incident, the camp's kommandant had all the prisoners line up and started selecting his ten. Mr. Szczesniak was in that lineup. When one of the ten chosen for execution began to plead with the kommandant to spare him because he had a family, Mr. Szczesniak witnessed how Father Kolbe stepped out of the lineup and told the Nazi officer he wanted to take the place of the other prisoner.

The kommandant agreed to accept the priest's offer and sent Father Kolbe to a starvation bunker where he was finally put to death with a lethal injection.  The presentation to Monsignor Milewski took place during the semi-annual meeting of national directors of the Polish American Congress in San Diego, CA., October 21.