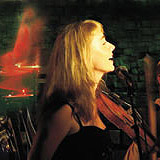 The rousing, spellbinding singer-violinist Joanna Slowinska is famous for her powerful "open voice" singing, skillful musicianship, and brilliant interpretations of folk music in both traditional and modern arrangements, including Jewish, Gypsy, and the folk-based settings by Zygmunt Konieczny of works by Polish poets. Joanna Slowinska is the winner of several prestigious awards. Her solo record Live in Alchemia received the Folk Record of 2005, a Polish Radio award by a vote of musical critics and journalists.

The first lady of Polish folk - one of the most fascinating and suggestive female vocalists on the Polish musical stage. (Tomasz Janas, Gazeta Wyborcza)

She is an artist of the highest order: the expressiveness of her singing captivates, the tonal quality of her voice is beautiful, her technique as singer and instrumentalist excellent. One critic has called Joanna the Ewa Demarczyk of Polish folk music. And, in reality, within that small, energetic figure there is something extraordinary, a drama and charisma that holds the attention and won't be forgotten. (Jan Poprawa, The LiteratureSalon)