Remembering The Murder Of A Polish Priest 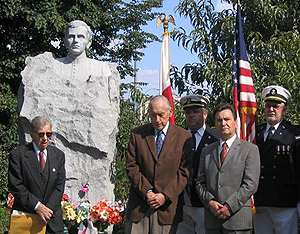 A SOLEMN MOMENT at the Father Jerzy Popieluszko monument as Polish Americans marked the anniversary of his 1984 murder.

Following a memorial mass at St. Stanislaus Kostka Church in the Greenpoint section of Brooklyn, N.Y., the Polish American Congress led a march to McCarren Park’s Popieluszko Square for an outdoor commemorative service in his honor.

Shown here are Frank Milewski (center), president of the Downstate N.Y. Division of the Congress and past presidents Michael Preisler (left) and Michael Pajak. In the background stands an honor guard from the Sea League of America (Liga Morska) alongside the monument the local Polish community erected in memory of the Polish cleric.

It was after the ruling Communists declared martial law in 1981 against the Solidarity movement’s efforts to gain freedom and independence for Poland that Father Popieluszko became prominent. He encouraged and inspired his countrymen to stand firm and rely on the principles of their Catholic faith to help them persevere in the crisis.

His sermons were so effective that the Marxists decided to kill him. It is believed the order for his murder came directly from Moscow itself.

“The enemies of freedom have always been the enemies of Poland,” said Michael Preisler, a survivor of Auschwitz and co-chair of the Polish American Congress Holocaust Documentation Committee. “And it seems they always kill our Polish priests.”

The Germans sent Mr. Preisler to Auschwitz shortly after Hitler’s SS had murdered another prisoner, Father Maximilian Kolbe, the Polish priest who was later canonized a saint by Pope John Paul II.