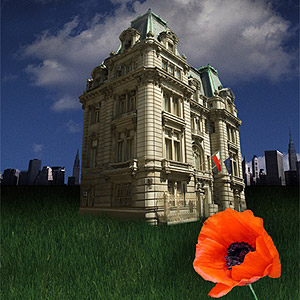 Nine salon-like events at a magnificent gem of Beaux-Arts style architecture, the De Lamar Mansion at the corner of Madison Avenue and 37th Street in New York City, are free and open to the public.

The grand finale of the 9-day celebration of the mansion’s centennial is a public architectural projection on the building’s façade by the L.A.-based multi-media artist and independent projection designer Bart Kresa (www.bartkresa.com). (See full schedule and program information below.)

The De Lamar Mansion Historical Background:
This series of events is organized by the Polish Consulate to celebrate the 100th anniversary of the De Lamar Mansion, a residence designed by architect C.P.H. Gilbert (who also designed the Warburg and Fletcher Mansions on Fifth Avenue that now house the Jewish Museum and the Ukrainian Institute, respectively), and built in 1906 for copper tycoon Joseph Raphael De Lamar. The building housed the National Democratic Club for 50 years before the Polish government purchased it in 1973.

Though the De Lamar Mansion is an historic landmark and one of New York’s most beautiful examples of the Beaux-Arts style of architecture, for many the building remains somewhat mysterious and unknown. The mansion’s elegant interiors have regularly provided a venue for concerts, receptions and meetings organized by the Polish Consulate, as well as by other organizations. All culturally curious New Yorkers are invited to experience this architectural and historic gem for the duration of the Centennial Salon and beyond.

(All of the events are free and open to the public, unless noted otherwise.)

Elzbieta Czyzewska and Olek Krupa, both acclaimed Polish-born actors living in New York, will give a dramatic reading of excerpts from two of Glowacki’s plays that deal with the émigré experience: Antigone in New York and Hunting Cockroaches

October 17, 7pm:    “At the Crossroads: The Poetry of Music”
An evening of sound climates with Jakub Omsky on cello, Jerome Lowenthal on piano, and Mark Foley on bass, with a special guest appearance by legendary Polish jazz trumpeter Tomasz Stanko, who’s in the midst of his U.S. tour.

October 18, 7pm:     “It Starts with the Logo: the Graphics of Solidarity”
A presentation by Lawrence Weschler, a former New Yorker staff writer, now director of the NY Institute for the Humanities, artistic director of the Chicago Humanities Festival, and author of many books, including the recently published Everything That Rises: A Book of Convergences

October 19, 6pm –    “Polyphony of Images. A Night of Cutting-Edge Contemporary Art from midnight:     Poland: Video, Performance, and Other Media”
One-night exhibition of over 30 of Poland’s best contemporary artists presented on three floors of the De Lamar Mansion by the Polish Cultural Institute and curated by its director, art historian Monika Fabijanska.

October 21, 7pm:    “The Joy of Creation: Science as Art”
An evening with Prof. Piotr Chomczynski (www.mrcgene.com), world-renowned molecular biologist and founder of the Molecular Research Center in Cincinnati, Ohio. (He is one of the most oft-cited scientists for his revolutionary single-step method of RNA isolation.) With musical commentary and counterpoint by Jakub Omsky on cello.

October 22, 6:30pm:    “A Symphony of Light”, designed by Bart Kresa
An architectural projection on the façade of the De Lamar Mansion by L.A.-based independent projection designer Bart Kresa who creates large-scale illumination projects around the globe (TV Gala in Salzburg, Austria, Fredericks of Hollywood's Valentines Celebration, Disney's 50th Anniversary, and many more; www.bartkresa.com).


The below final event is by invitation only:

October 22, 7:30 pm:    “A Feast for the Senses” (by invitation only)
The final evening features delights of taste, sound, and sight:

We wish to thank the following sponsors whose generosity made the Centennial of De Lamar Mansion possible: