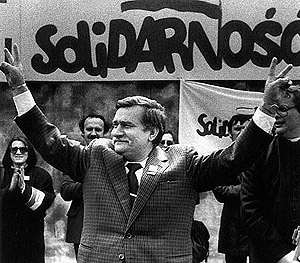 PAC, Washington, D.C., September 22, 2006 – U.S. Senate passed a resolution designating December 13, 2006, as a Day of Remembrance on the 25th anniversary of the imposition of martial law by the Communist government in Poland. The resolution, sponsored by Senator Barbara Mikulski (D-MD) and cosponsored by Rick Santorum (R-PA), passed the U.S. Senate unanimously.

“Through the dark days of martial law, Polish Americans stood by our cousins abroad, working to support the Solidarity movement. We found ourselves troubled and fearful for our friends and relatives in Poland, but we never doubted that Poland would one day regain its freedom,” said Senator Mikulski. “Polish people everywhere – whether we live here, as full American citizens, or in Poland – know that the heart and soul of Poland lie with democracy and lie with freedom.”

“Poland’s peaceful march to freedom offered a beacon of hope to all those in Europe suffering under communist rule,” continued Senator Mikulski. “Today, the United States and Poland are close partners and good friends. As Polish troops fight side-by-side with American troops in Afghanistan and Iraq, I join the American people in remembering the grim day that martial law was placed upon Poland. I honor the people of Poland, whose heroic and peaceful resistance hastened the end of the Soviet Union and the emergence of one Europe – whole and free.”

"I am proud to cosponsor this important resolution that honors the people of Poland who suffered under martial law for nearly eight years and risked their lives to restore liberty in Poland," said Senator Santorum. "The resolution calls on the American people to remember that the struggle of the people of Poland greatly contributed to the fall of communism and the ultimate end of the Cold War."

The Polish American Congress, which since its inception in 1944 fought for the cause of free Poland, applauds the efforts of Senators Mikulski and Santorum in recognizing and commemorating the anniversary of those important and tragic events in Polish history.

Designating December 13, 2006 as a Day of Remembrance to honor the 25th anniversary of the imposition of martial law by the Communist government in Poland. Whereas, on May 9, 1945, Europe declared victory over the oppression of the Nazi regime;

Whereas Poland and other countries in Central, Eastern, and Southern Europe soon fell under the oppressive control of the Soviet Union;

Whereas for decades the people of Poland struggled heroically for freedom and democracy against that oppression, paying at times the ultimate sacrifice;

Whereas, in 1980, the Solidarity Trade Union was formed in Poland;

Whereas membership in the Solidarity Trade Union grew rapidly in size to 10,000,000 members, and the Union obtained unprecedented moral power that soon threatened the Communist government in Poland;

Whereas, on December 13, 1981, the Communist government in Poland crushed the Solidarity Trade Union, imprisoned the leaders of the Union, and imposed martial law on Poland;

Whereas, through his profound influence, Pope John Paul II gave the people of Poland the hope and strength to bear the torch of freedom that eventually lit up all of Europe;

Whereas the support of the Polish-American community while martial law was imposed on Poland was essential in encouraging the people of Poland to continue to struggle for liberty;

Whereas the people of the United States were greatly supportive of the efforts of the people of Poland to rid themselves of an oppressive government;

Whereas the people of the United States expressed their support on Christmas Eve 1981 by lighting candles in their homes to show solidarity with the people of Poland who were suffering under martial law;

Whereas, in 1989, the people of Poland finally won the right to hold free parliamentary elections, which led to the election of Poland's first Prime Minister during the post-war era who was not a member of the Communist party, Mr. Tadeusz Mazowiecki; and

Whereas, in 2006, Poland is an important member of the European Union, one of the closest allies of the United States, a contributing partner in the North Atlantic Treaty Organization, and a reliable partner in the war on terrorism that maintains an active and crucial presence in Iraq and Afghanistan: Now, therefore, be it