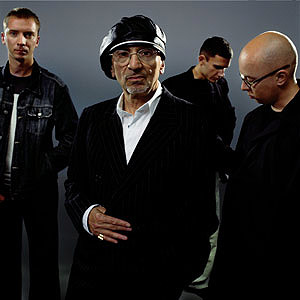 From L.A.’s Jazz Bakery to Manhattan’s Birdland - October 4-28, 2006. Presented by ECM and the Polish Cultural Institute.

A living icon of Polish – and European – jazz, Tomasz Stanko’s reputation has been secure for decades. There is universal agreement now, however, that he is playing at the peak of his powers. Since his  first recording for ECM in the 1970s, Stanko has been hailed as both a composer and performer whose work displays a simplicity of form and mellowness that comes from years of work, exploration, and experience.

Pianist Marcin Wasilewski, and bassist Slawomir Kurkiewicz were 18 and drummer Michal Miskiewicz only 16 when Stanko took them under his wing in 1994. Pianist, bassist and drummer have also built up a reputation as a unit in their own right, working under the name Simple Acoustic Trio, which has meanwhile become one of Poland’s most popular bands.

In October 2006, the Tomasz Stanko Quartet is launching its fourth U.S. tour with five nights at the Jazz Bakery in L.A., then hitting flagship jazz clubs across the country to cap it all with another four-day residency at New York’s Birdland – a rare gig for a European band. Young musicians continue to demonstrate a magical rapport with their elder mentor, a vibe that is something to behold and hear. In this 12-city 20-date coast-to-coast North American tour, the quartet will be supporting the release of their new CD, "Lontano" the group’s third album for ECM.(Stanko’s partners have also won acclaim on their own with a CD from ECM called „Trio”.)

"He is one of the best trumpeters in the world." – Christopher Porter, JazzTimes – March 2006

“Their years together have resulted in an ensemble with an utterly symbiotic creative flow, solos darting through collective passages as the music streamed fluidly from one selection into another. Kurkiewicz and Miskiewicz play with a fertile combination of swing and subtlety…Wasilewski’s piano soloing displayed a coalescing talent, a potentially emerging jazz star in his own right.” – Don Heckman, LA Times "Stanko remains a defiant individualist, a romantic predator of song who […] has clinched not just his own place in jazz history but also that of his Polish peers and predecessors." – Brian Morton, The Nation, March 14, 2005