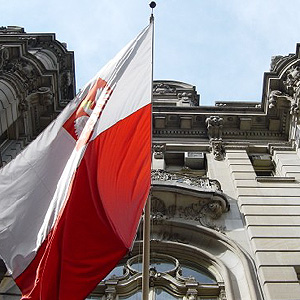 Sunday, October 22
6:30 PM – „De Lamar Mansion Centennial Days of Culture Grand Finale” – a symphony of light and illusion at the façade (Bart Kresa Productions©, Santa Monica) - open to the public,
- followed by a festive presentation banquet of the haute Polish cuisine (co-presented by Magda Gessler Restaurants®, Warsaw),
- exhibition of works by the world-renowned photographer Ryszard Horowitz and the unveiling of his specially designed surprise piece,
- musical intermezzos by the Polish-born Metropolitan Opera stars.

A symphony of light show is open to the public; remaining evening events by special invitation only. For further information please
contact: public affairs@PolishConsulateNY.org  www.polishconsulateny.org


History of the building

De Lamar Mansion (named after its first owner), the current seat of the Consulate General of the Republic of Poland, has very special
significance not only for New York but for the entire nation. This unique structure was designed in the French style of Beaux-Arts by the eminent New York architect C.P.H. Gilbert, and completed in the years 1902-1905.

The Mansion, owing to its grandness and elegance soon became a pearl in the crown of the city in its golden era. In his blueprint, Gilbert utilized several astonishing solutions especially in the interior design. From the basement all the way to the mansard roof the
structure boasts of the features typical of the famous French Beaux Arts style, namely the ideal symmetry of the building, beautiful and much detailed stone sculpted walls, the steep roof covered with copper plates and sculpted mansard windows.

Massive, oak doors open up the residence. Hand-wrought ornaments, situated between sculpted marble columns, provide additional
adornment. All its decorative elements truly catch the eye and make this building a real treasure of Madison Avenue. The vastness of the building, its numerous parlors and rooms exactly met the expectations for such a structure at the time. The first floor, in the eastern part of the building, once housed a dining room, while the western part was a library and a billiard room. The main staircase used to show off a fountain surrounded with exotic plants and marble figurines. The second floor housed the lounges: the central one was used for a ballroom, another one for a concert hall, and the third one - painted in Pompeian red and adorned with famous paintings and sculptures – was once a gallery of art. Stein glass, made by Tiffany himself, used to be illuminated with electricity which made this magnificent structure very modern for its time of the beginning of the 20th century. The third floor contained a large bedroom, with a bathroom, and a breakfast room of Mr. De Lamar’s, together with two guest rooms, also equipped with bathrooms. Right above it there was a bedroom and a bathroom designed for the owner’s daughter, and one more guest room with a bathroom. The uppermost floor housed the servants’ quarters and a laundry room. Still above it, behind a classical mansard roof there was a terrace which exists to this very day.

Regrettably, this magnificent and lavish family residence had never been used according to the initial intentions. It was filled with sadness rather than joy. Joseph De Lamar soon divorced and his daughter Alice never found happiness in that home. After the death of a 75-year-old De Lamar in 1918, the mansion was sold to the American Bible Society, and in 1923 the National Democratic Club purchased it for its headquarters. In 1973, Poland bought the Mansion, which was then in bad disrepair and called for immediate renovation work, for the new seat of the Consulate General of Poland in New York.