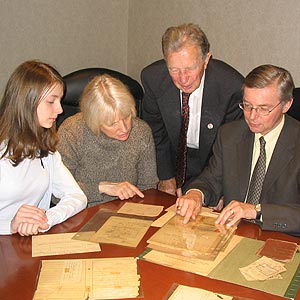 Andrew Kaminski (right), chosen as co-chair of "Children of Polish Christian Holocaust Survivors," shows Michael Preisler (standing) letters and documents his family saved when his father was a prisoner in Auschwitz. Looking on are Preisler's granddaug

When the Downstate New York Division of the Polish American Congress recently announced it was forming a new unit to be known as the "Children of Polish Christian Holocaust Survivors," the daughter of an Auschwitz survivor was designated as chairperson.

Now, the son of another Auschwitz survivor has been appointed to join her as the group's co-chair making it an all-Auschwitz leadership.

Andrew Kaminski, a Brooklyn attorney prominent in many Polish American organizations, was given the responsibility of the number two position to work with Eva Preisler-Grabicki who chairs the Children's unit.

She is the daughter of Michael Preisler, a survivor of Auschwitz. He is presently honorary president of the N.Y. Congress and co-chair of the Polish American Congress Holocaust Documentation Committee.

There is a touch of irony to the joint leadership of Mrs. Preisler-Grabicki and Mr. Kaminski. Not only were both their fathers prisoners in Auschwitz, but both fathers were later transferred to the Nazi concentration camp at Ebensee, Austria. The U.S. Army subsequently liberated both of them from there on the same day, May 6, 1945.

"Children of Polish Christian Holocaust Survivors" has been created as a committee of the Polish American Congress. Its members will honor the memory of their parents and grandparents who suffered the terror of the German occupation of Poland in World War II. "We want to make sure the history of their tragedy will be preserved and remembered," said Kaminski.

It is generally accepted that six million Jews and at least five million "others" were direct victims of the Holocaust. The U.S. Holocaust Memorial Museum in Washington, D.C. reminds its visitors about the "others," and about the Poles in particular.

The Museum takes special note of the order Adolf Hitler gave his generals just ten days before he had them invade Poland and start World War II. On the wall near the entrance to the permanent Poland exhibit are inscribed the hateful words of his command to "send to death mercilessly and without compassion, men, women and children of Polish derivation and language."

Because most Polish survivors preferred to forget the bitter memory of the horrors the Nazis and Communists inflicted on them during the occupation, they did little to promote the story of their experience after they emigrated to the United States.

As a result, it comes as a surprise to many Americans when they discover that Jews were not the only Holocaust survivors.

Eva Preisler-Grabicki and Andrew Kaminski know how true this is from their own individual experiences. When she tells someone her father was in Auschwitz," there are times when I've been told I must be Jewish because nobody ever heard about any Christians ever being in Auschwitz," she said.

Kaminski says he also has been mistaken for Jewish, "even in my own community." Michael Preisler has agreed to act as advisor to the committee his daughter and Kaminski will head. Mr. Preisler is currently the foremost spokesman of the Polish American Congress on matters concerning the ordeal of Polish Christians at the hands of the Nazis. He is a frequent speaker at both public and private schools.

"When I tell students I'm an Auschwitz survivor and a Christian, they get a new understanding of the magnitude of the Holocaust. All of a sudden Christian students no longer see it simply as someone else's problem. It then becomes something with which they can personally identify," he said.

Attorney Kaminski is in private practice and maintains his law firm in the heart of Brooklyn's Greenpoint section. He is married and the father of two children.