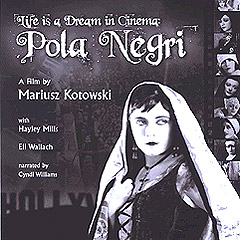 The Museum of Modern Art, Department of Film and Media, presents POLA NEGRI: LIFE IS A DREAM IN CINEMA a new documentary by Mariusz Kotowski to open POLA NEGRI RETROSPECTIVE

Pola Negri (1897-1987) - born Barbara Apolonia Chalupiec in Janowa, Poland - was the first European-Hollywood crossover star, paving the way for Greta Garbo and Marlene Dietrich. Yet few people today know this magnificent actress or the dramatic events of her life, like her liaisons with Charlie Chaplin and Rudolph Valentino. A discovery of Max Reinhardt's disciple Ernst Lubitsch, the earthy, charismatic Negri and her great director were offered contracts in America in 1922 by Paramount Pictures after the huge success of their film Madame Du Barry (1919), optioned and retitled as Passion (1919) for release in America. Negri had in fact made 9 films in Poland and 17 in Germany by the time she joined Paramount. Although she and Lubitsch had already made 7 films together, their sole collaboration in the U.S. was Forbidden Paradise. Negri also worked with such major figures as Herbert Brenon, Raoul Walsh, and Mauritz Stiller, enhancing her reputation as an accomplished performer. Less successful after the advent of sound and the introduction of the Hays code, she returned to making films in Germany; but eventually, resisting compromise with the Nazi propaganda machine, she left for France, returning to America at the outbreak of World War II. Her final film was made for Disney in 1964; all in all she had acted in 62 movies.

A retrospective of Pola Negri's best films from the Museum's collection will be opened and closed with the East Coast premiere of Mariusz Kotowski's documentary Life Is a Dream in Cinema: Pola Negri (USA, 2006). Examining the life and work of the legendary actress, the documentary features interviews with those who worked with Negri or have studied her films, including the Academy-Award Winning actress Hayley Mills, actor Eli Wallach, film historian Jeanine Basinger, Paramount producer A.C. Lyles and others. Scored with music of Frederic Chopin, the film includes clips from Negri's movies and shows the incredible range she demonstrated through the silent films and into the talkies and from black-and-white into color. It will be screened on Monday, September 18 at 8:15 with introduction by Kotowski and Eli Wallach, and repeated on Sunday, September 24, at 1:30 pm.

".the film gives Negri and her piercing eyes their due as one of the silent greats" - Kevin Crust, Los Angeles Times, Apr. 27, 2006