They were WW II's "first to fight" 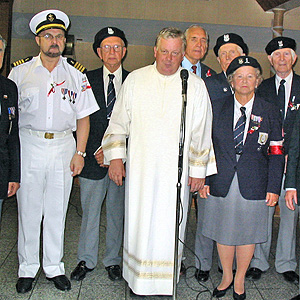 “What an honor to stand alongside these remarkable heroes .” That’s what Frank Milewski, president of the Downstate New York Division of the Polish American Congress, said he felt as he and members of his organization joined with Polish veterans of WW II to commemorate the September 1, 1939 invasion of Poland and the start of the war.

Rev. Jan Michalik of the Pauline Order from the Shrine of Our Lady of Czestochowa celebrated a memorial mass marking the anniversary of the historic event at St. Stanislaus Bishop & Martyr Church in New York City. The annual observance has been a part of the Polish American Congress agenda for the past ten years.

Shown in the photo above are: (from left to right) Antoni Chroscielewski, commander of the Polish Army Veterans Association, District 2. He is a veteran of the dramatic and bloody Polish victory over the Germans holding the Benedictine Monastery on the summit of Monte Cassino in Italy;

Stanislaw Pawlowski, president of the Sea League of America, Gdynia 15, a patriotic organization upholding and preserving Polish naval traditions and one of the leading member organizations of the Polish American Congress;

Michael Madejski, president of Armia Krajowa 39 (AK), which was the largest and most effective underground resistance in all of German-occupied Europe. During the Warsaw Uprising of 1944, Mr. Madejski was a member of the Polish Scout Battalion Zoska that liberated 350 Jews from the concentration camp Gesiowka the Nazis were operating inside the city. Israel’s Yad Vashem has honored Madejski and his fellow Zoska scouts for their heroic act;

Rev. Jan Michalik and Frank Milewski; Wladyslaw Bloniarz, a courier of AK during the German occupation; Wanda Lorenc, member of AK who fought in the Warsaw Uprising. When she was later sent to the concentration camp at Spandau, a woman SS guard kicked her in the face and knocked out her teeth simply for handing a piece of bread to a Jewish prisoner; Andrew Garczynski, a member of AK during the war and an Auschwitz survivor;

Paul Wos who fought with AK in the Warsaw Uprising and later sent to the Flossenburg concentration camp. Mr. Wos and his parents have been honored by Yad Vashem for rescuing and hiding twelve Jews at the time the Germans were liquidating the Warsaw Ghetto in 1943;

Alex Borys, a veteran of AK.