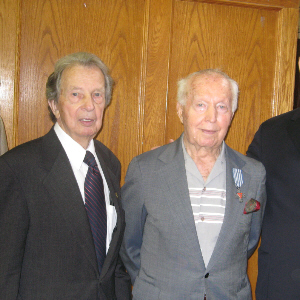 Brooklyn, N.Y. … June 14th was observed as Flag Day in America. In Poland, the date was remembered as the day in 1940 that Hitler and his Nazis opened the gate of Auschwitz to receive the first inmates – 728 Polish prisoners they transported from Tarnow, Poland.

Shown with him are (from left to right) Andrew Garczynski; Michael Preisler and Walter Kolodziejek who participated in a special commemoration held at the Polish American Congress.

Mr. Kolodziejek was one of the earliest prisoners condemned to Auschwitz arriving there in August, 1940, just two months
after the first transport of Poles.  Mr. Preisler came in October, 1941 and Mr. Garczynski in 1943.

Mr. Kolodziejek was also one of the first prisoners to be used by Auschwitz doctors for human experiments.

By the time Auschwitz was liberated in 1945, Jews represented the largest group murdered there.  Polish Christians were the
second largest.

It was ironic that, just a week earlier, a Holocaust Memorial Park in Brooklyn honoring only Jews added five more groups as the other victims of the Holocaust: homosexuals, Jehovah’s Witnesses, the disabled, political prisoners and Gypsies.  Polish Catholics were disregarded.

That came as no surprise to Michael Preisler who helped form the Holocaust Documentation Committee of the Polish American Congress because of repeated refusals to acknowledge the Polish and Catholic victims.

“Unfortunately, there’s an ugly anti-Polish and anti-Catholic bias that keeps on showing up among a lot of Holocaust
writers and people in the media.  They twist the Holocaust as a way to express their prejudice,"  he said.