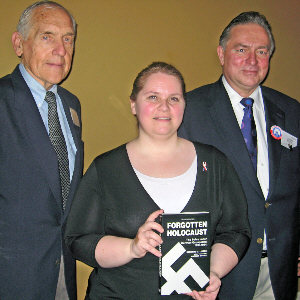 Taking a leading role in the newly-formed "Children of Polish Christian Holocaust Survivors", Committee in the Illinois Division of the Polish American Congress will be Kathy Diipla, M.D. (center) shown here holding a copy of Richard Lukas' "Forgotten Holocaust - The Poles Under German Occupation 1939-1944"

Welcoming her into the organization is Illinois Division President Casey Chlebek (right) as Frank Milewski of the PAC’s New York-based Holocaust Documentation Committee looks on.

Regardless whether the history of the Polish people during the time of the German and Soviet occupation of Poland was merely forgotten or intentionally suppressed, Dr. Diipla has good reason for joining the “Children of Polish Christian Holocaust Survivors.”

Her grandfather was one of the nearly two million Polish citizens the Communists shipped out to the Gulag as they imposed a reign of terror in Poland together with the Nazis.

Then Dr. Diipla’s father, himself only a child at the time, narrowly avoided being sent to Germany to be part of Hitler’s diabolical scheme to “Germanize” Polish children.

The recent PBS series describing the tragedy and betrayal of the Polish people, “Behind Closed Doors,” is encouraging more individuals like Dr. Diipla to speak up and make sure their family’s experiences during the “Forgotten Holocaust” will be remembered.