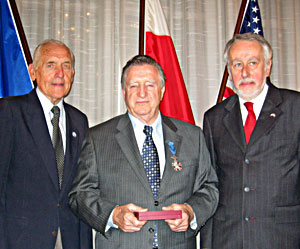 But what he is wearing in the photo above is Poland's Cross of Merit awarded in the past to many Polish war veterans and Holocaust survivors.

In ceremonies commemorating Poland's May 3rd, 1791 Constitution, adopted shortly after America's Constitutional Convention of 1787, Poland's Consul General Krzysztof Kasprzyk (right) presented Szarejko with the decoration for his efforts to promote the cause of Poland in the U.S., particularly New York City.

Looking on is Frank Milewski (left), president of the Downstate New York Division of the Polish American Congress where Szarejko is vice president and chairman of that organization's Political Activities Committee.

Szarejko spent nearly three years assisting Consul General Kasprzyk in clearing the way for placing a statue of Jan Karski in front of the Consulate on Madison Avenue and E. 37th  Street in Manhattan.

Just a few weeks ago, New York City designated that intersection "Jan Karski Corner," according to Milewski.  He also noted that Szarejko is well known and highly regarded in New York for the many years he has devoted to the advancement of  good will and understanding among the ethnic groups who live there.

Szarejko said it was an honor for him to work on the Karski dedication because of his admiration for this World War II hero "who risked his life when he left German-occupied Poland on a secret mission to England and the United States to warn the Allies the Germans were conducting the genocide of the Jews in his country."

The way Szarejko sees it, "it was shameful that Karski's warning to the West was ignored and the truth about Poland's desperate appeal to get help for the Jews has been just as ignored today as it was then."