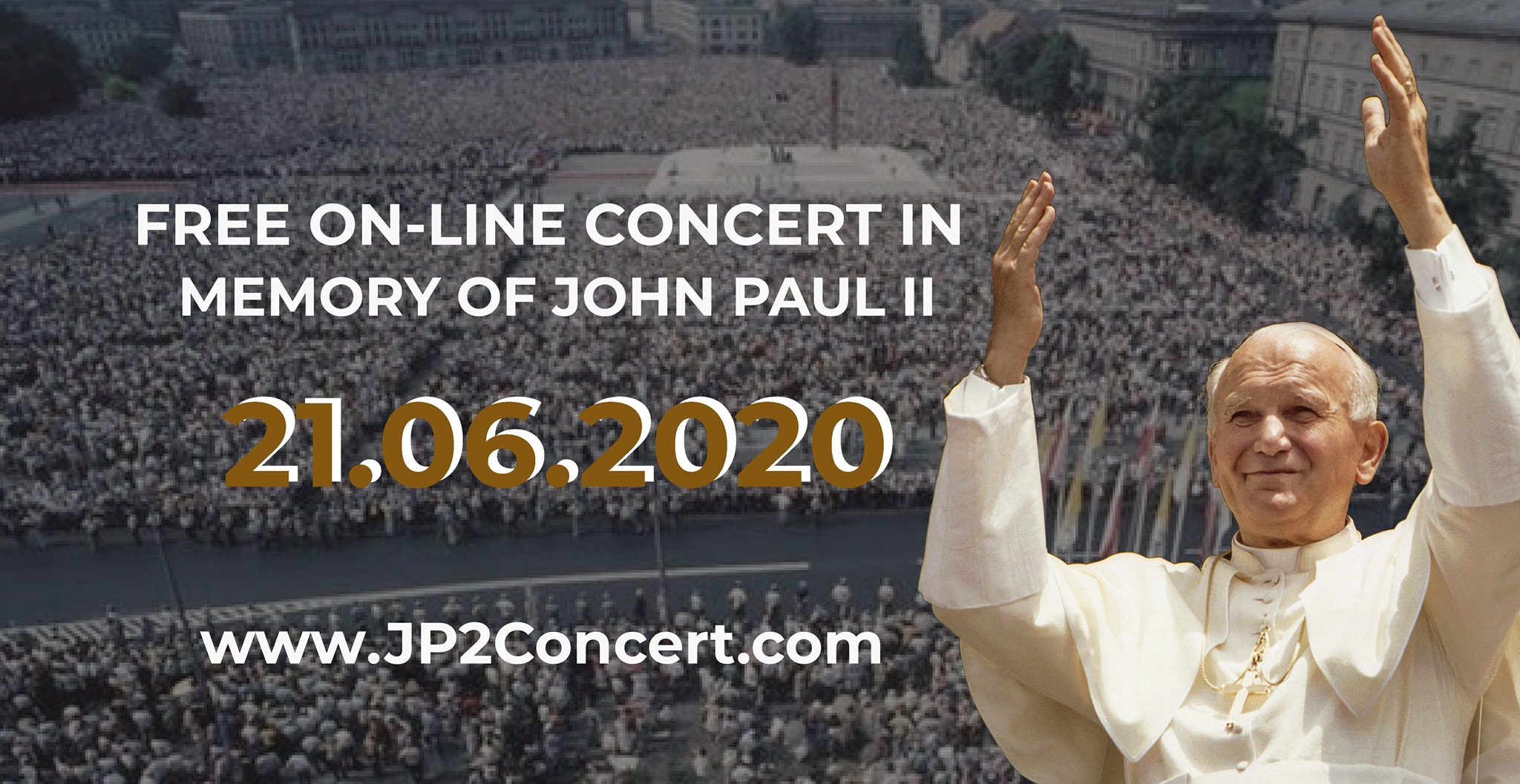 The online concert event will be broadcast on Sunday, June 21 at 20.00 CEST/ 2PM EDT, on www.JP2Concert.com website, and will be available to view until Tuesday evening.

On the 100th anniversary of the birth of Karol Wojtyła, 40 outstanding artists from Poland, the United States, England, Germany, Korea, Italy, Japan, Taiwan, Turkey and Switzerland will join together to pay tribute to the Great Pole.

The online concert event will be broadcast on Sunday, June 21 at 20.00 CEST/ 2PM EDT, on www.JP2Concert.com website, and will be available to view until Tuesday evening.

The concert program includes sacred and classical music, including Ave Maria by F. Schubert, a song of the cult of Mary to whom John Paul II entrusted his life. It will be performed by Angel Joy Blue, a soloist of the Metropolitan Opera promoted by Placido Domingo and known for her title role of Bess in Porgy & Bess by G. Gershwin.

Other pieces will include Panis Angelicus and Laudate Dominum by W.A. Mozart to be performed by the soloists of the Metropilitan Opera – MaryAnn McCormick and Lisette Oropesa – the latter having gained outstanding acclaim for the main roles of Violetta in Traviata by G. Verdi and Manon by J. Massenet. In the program, one will also find the Meditation from the Opera Thais by J. Massenet with the participation of Dagmara Dryl – the first soloist of the Polish National Ballet, choreographed by Zofia Rudnicka; Ave Maria from the Opera Otello by G. Verdi performed by Latonia Moore – the performer of the main role of Aida at the Metropolitan Opera; Lamb of God performed by Brandie Sutton to the accompaniment of Damien Sneed who collaborated with such stars as Aretha Franklin, Jessye Norman, Wynton Marsalis, Stevie Wonder and Diane Ross. Soloists of the Polish National Opera Edyta Piasecka will perform the song Nai by S. Moniuszko, Aleksandra Olczyk - Pie Jesu, and Rafał Bartmiński "You know Li Ten Kraj" by S. Moniuszko and the rarely performed song "Pray for my soul" from the Polish Mass by Jan Maklakiewicz.

Great instrumentalists will perform, among others, Veriko Tchumburidze, first prize winner of the last International H. Wieniawski Violin Competition as well as Piotr Pławner, Janusz Wawrowski and Adam Palma, the latter to perform F. Chopin's Polonaise in A major on guitar