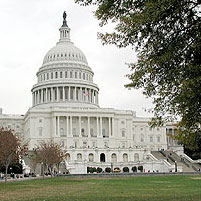 WASHINGTON, DC, July 28, 2006 – The Polish American Congress (PAC) yesterday proudly represented the Polish American community at Taste America, an invitation-only event at the Capitol building in Washington, DC attended by more than 650 guests primarily including U.S. Congress Senators and Representatives with their families. The event was held under the theme of E Pluribus Unum From Many, One and was tailored to present contributions of various ethnic groups to American history and culture.

Particularly successful elements of the exhibit included: A) a colorful, wall-size hanging map of the United States showing the Polish American population in each state, B) two engaging, picture-filled posters highlighting the accomplishments of the most prominent Polish Americans, C) elegant displays of Polish art, including hand-painted silks, traditional Christmas tree ornaments, artistic glass, and contemporary art, and D) popular gift bags that included both a taste of Polish chocolates and liquors as well as an informative newsletter summarizing the information presented in the exhibit to educate attendees about Polonia and the PAC.

The exhibit also included on-table displays presenting the history of Polonia in the United States; information about the Polish American Congress, including its mission and major accomplishments; details about other prominent, Polish American organizations; a listing of American universities offering programs or courses in Polish studies; and a multitude of other information about American Polonia in the form of a large diversity of brochures, publications and handouts.

All visiting guests were invited to sample Polish sweets as well as to take home CDs with music by Chopin and Liszt performed by Polish American pianist Jerzy Stryjniak.