"The Partisans" go for show 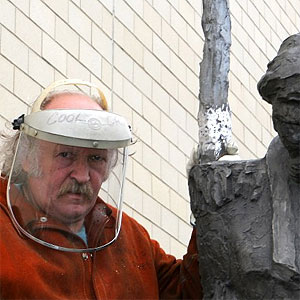 Behind barb wired fence with lock on the metal gate "The Partisans" statue, depicting five horseman of the "Pulkownik" (colonel) group by Andrew Pitynski is prepared for the new show. After WWII Michal Krupa - "Pulkownik" among many others did not stop the fight to liberate Poland of communism.

Is this why we needed the artist to come back to repair his own sculpture? When 27 years ago he was thinking about his project he couldn't imagine performing today's job. Could he have been dreaming this strange dream about his “child”, unexpectedly broken and dropped off? During deportation from Boston Common the spears were cut off, because of inconvenience. Whole statue was unconvinced in Boston Common, so it was hidden behind a fence in a South Boston warehouse on January 18th, 2006.

Andrew Pitynski came to South Boston's warehouse with his assistant Douglas Roberts from New Jersey. The repairing of five spears took a few long hours. The Sculpture's Foundation of California paid the bill. The foundation is an owner of 2.5 tone statue; it is 7 yards high with the spears now on and 10 yards long by 4 yards width. Boston's MBTA will lease “the Partisans” for the next few years, thanks to its president Dan Grabauskas. The Art Director, Barbara Boyland works really hard to set everything in its place. She was present during the repairing together with the owner of the warehouse Larry Doherty.

In a few days the Polish Partisans Memorial will stand in at the next place of its long journey by the Boston area. First, the sculpture was moved from the front of the City Hall to Boston Common in 1983, then Mayor Menino agreed to move it out to the warehouse, and now, when Boston Press and public, including Polonia protesting decision, “The Partisans” will show up between new Convention Center and World Trade Center on Summer St in South Boston as a part of the MBTA Art Program. The City called itself: a cradle of American Revolution, democracy and freedom will give hospitality to worn off figures of Polish Fighters. The question is, for how long?

By the 1st of August  “The Partisans” will hopefully take its stand, so Boston Polonia will have a chance to celebrate the Warsaw Uprising 1944 Anniversary together with “The Partisans” in a more elegant place than the back of an warehouse. Obviously, the place is not important. OK, to some extent the place is important, but the statehouses and city halls, big armchairs and round tables are not sometimes the best places to celebrate freedom. The streets are better with fresh air and open sky to celebrate real freedom. This is all about it, the freedom itself and very high price paid always by the people, including the Poles, for freedom is the essence.

A long time ago, during WWII freedom walked with the partisans and Warsaw insurgents. She assisted them among explosions and ruins in the city's underground canals in the marshes and forests. Today, here in Boston, this freedom needs the best part of our memory. It gives us a symbol to use; it gives us this strange shape of tired five horsemen. “The Partisans” survived with spears proudly scratching American sky.