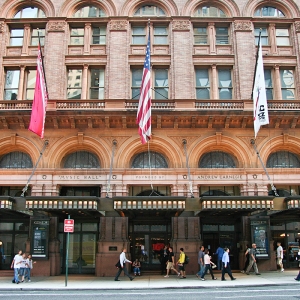 The Polish Government has declared 2019 the Year of Stanisław Moniuszko, the father of Polish Opera.

It is an effort not only to “shed light on the life and rich legacy of the exceptional conmposer”, but also to show “to Poles a patriotic attitude and the need amongst artists to draw inspiration from the Polish culture” (Polish Senate Resolution).

The concert in Carnegie Hall will showcase some of the most beloved songs and opera arias of the composer, as well as his String Quartet in D minor, virtuoso piano paraphrases of his songs, choir pieces, and the World Premiere of “Crimean Sonnets”, by composer Norbert Palej, dedicated to Moniuszko to the words of Adam Mickiewicz.

The concert in Carnegie Hall will inaugurate the Moniuszko celebrations in the United States.

The concert will be hosted by Polish actress Liliana Komorowska.

Arias from the operas "The Haunted Manor" and "Halka"

HENRYK WIENIAWSKI - Polonaise in A major

Who is Authorized to Enter Poland - an updated message
Concert in Memory of John Paul II - Online this Sunday, June 21
Charter flight from Warsaw to New York on Wednesday, June 24
PLL LOT: Charter flights to the United States: Warsaw to Chicago (ORD) and Warsaw to New York (JFK)
Flight from Warsaw to Chicago
PSFCU in the Time of Pandemic
Desecration of Tadeusz Kosciuszko Statue in Washington D.C.
LOT Polish Airlines Will Run Two More Charter Flights to the United States
Why We Must Support S. Res. 566 Commemorating the 80th Anniversary of the Katyń Massacre
SEE MORE

Concert in Memory of John Paul II Celebrating 100th Anniversary of His Birth Handcrafted Artisan Soap from MagiDo NYC Covid Hospitalizations Down 95% from Peak Affordable Building Lots in Florida! Buy All Five or Just One NAWA Chair programme 2020 Dogs will Try to Rescue Their Owners if They Can News From United Poles FCU
read more