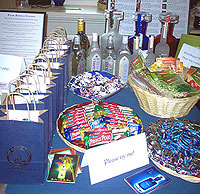 The display was prepared and presented by Dr. Barbara Borzuchowska Andersen, the Polish American Congress' Washington, D.C. Office director of research and Internship coordinator, and two summer interns, Marta Laskowska, a student at the University of Iowa, and Daniel Godlewski, who is attending Georgetown University.

On the table: An ornate, hand painted table cloth done by the Polish Silk (Jedwab Polski - Milanowek). Behind the table: A large, wall-size map of the United States showing numbers of Polish Americans in each state. Both sides of the display table were flanked by two posters, prepared especially for the event, presenting more than 80 Polish Americans who have contributed the most to the American history, science and culture.

In the foreground: Albums with illustrations by Mr. Rafal Olbinski, a Polish American artist residing in New York City.

The central part of the table presented information about the Polish American Congress, including the publications: Role of the Polish American Congress in the Expansion of NATO, PAC's 60 Years of Service, the Role of the PAC in the Forced Labor Compensation Program, as well as PAC information pamphlets and handouts. The section also included a complimentary large size book, The Accomplished Senator, by Laurence Grimald Gozlinski dated 1568 A.D., as well as complimentary CDs with music by Chopin and Liszt performed by a Polish American pianist -- Jerzy Stryjniak. The section also included information about Polonia in general, e.g. listing and brief description of largest and most significant Polish American organizations, American univerisities offering courses in Polish studies.

The right-hand section of table included gift bags adorned with the PAC logo and containing samples of Polish chocolate (Wedel, Wawel), sample of Bison vodka and apple juice, and a newsletter summarizing the information available at the display. Right next to the gift bags, there was a display of 9-10 bottles with Polish spirits and liquors (Belvedere, Chopin, Luksusowa and Ultimat); in foreground a basket with Polish herbs, spices and seasoning, and trays with various kinds of chocolates and sweets laid out for tasting.