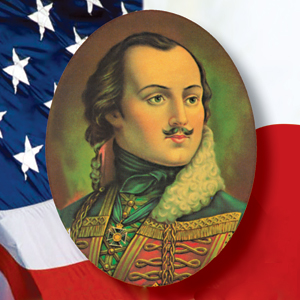 Polish Americans Come Together in Honor of General Casimir Pulaski

The General Pulaski Memorial Parade Committee, Inc. of New York announces its celebration honoring the great Polish hero who was instrumental in securing American freedom during the Revolutionary War. The theme of this Parade is "Celebrating the 400th Anniversary of Polish Pioneers arriving at the Jamestown Colony in Virginia".

At 9 a.m. on the day of the parade, there will be a concelebrated special Mass led by the His Eminence Cardinal Edward Eagan at Saint Patrick’s Cathedral. For questions regarding the Mass please contact Genia S. Golda at (212) 388-9859.

The Parade itself will step off from Fifth Ave. at 30th Street at 12:30 p.m. led by the Clifton Mustang Band under the direction of Robert Morgan. If you wish to view the Parade from the reviewing stands, which will be located at 40th and 41st Streets, you may purchase tickets by contacting Slavik Niemynski at (908) 275-4843.

Many Polish-American organizations will be marching up Fifth Ave. accompanied by numerous honorable dignitaries. Please show your Polish-American pride and heritage by supporting these events.

This annual event has been celebrated on Fifth Ave. since 1937, in honor of the memory of Brigadier General Casimir Pulaski, a courageous soldier who gave his life during the American Revolutionary War. His life represents the dedication of countless Polish Americans to the personal liberty and independence, which has defined the spirit of the United States of America.

We thank major parade sponsors including: