Police brutality at an annual "Taste of Polonia" festival 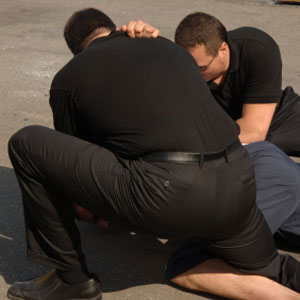 (...) about 5 heavy security guards against a skinny guy like me. They threw my face down on the asphalt, while cuffing and twisting my arms. At the same time, they were doing the same thing to minimum 2 other people.

I am writing this letter to you to inform you of a situation I was in yesterday, perhaps this will make an important news story. Me and my friend fell victim to off duty Police brutality at an annual "Taste of Polonia" festival. We ended up being arrested for no apparent reason, and abduceted (as documented by a health proffesional).

The story begins like this: Me and my friends were having fun during the Vavamuffin concert (reggae band from Poland.) The stage where the band was playing, was seperated from the crowd by a short fence. The distance between the completely relaxed and peaceful crowd and the stage was about 6 yards. The crowd wanted to get closer to the stage and started pushing forward on the fence. When the security guards (presumably off duty cops) noticed this, they jumped into action. They started indiscriminately pushing people, with great force. I happened to be one of the people in the front of the crowd. The police grabbed my arms and started twisting them (causing bruises), during this time I screamed with pain, that's when they threw me down to the ground. About 5 heavy security guards against a skinny guy like me. They threw my face down on the asphalt, while cuffing and twisting my arms. At the same time, they were doing the same thing to minimum 2 other people. At one point, they cuffed me so hard, I completely lost feeling to my left hand. I started screaming with all force for help, telling them about my wrist. My pleas were to no extent. After this, my muscles completely collapsed from pain. After screaming on top of my lungs and letting my knees to the ground, somebody loosened a little the cuff on my left wrist, but not the right, as I asked.

After this we were transfered over the Chicago Police. We were taken to the sixteenth district. They cuffed us to some pipe and let us sit in agony for hours. At one point I screamed for help, telling them that my wrist hurts so bad, I cannot feel my left hand. I told them that they need to take me to a hospital. After hearing this, they tried very hard to discourage me from going to the hospital. They send out this friendly, negotiator cop to try to persuade me not to. He said: "You know, you are making a great deal out of a small arrest. Look, your friend is about to go home, he'll be free in 10 minutes, you don't want to go home? If you go to a hospital, you won't get home for next 40 hours. You should reconsider." I replied: "No, I need to see a doctor"

After we went to the hospital, they have documented my injury: "Sprained wrist". Strange thing is that at the hospital, no one really inspected me for injuries, they only kept asking me: what happened, what's wrong, did you resist, did you cause this to yourself. After I told the nurse not to ask me these questions because first: it is not her job to do so, second: I will not answer her questions without the presence of my lawyer. Strange thing is that they have documented the sprain on my left wrist, buy failed to identify other injuries that I was not aware of. After arriving home, I noticed many bruises on my body that I could obviously not see without looking at the mirror. Nobody at the hospital bothered to "check me out" thoroughly.

After this long ordeal, I have been discharged, my handcuffs were taken off at the hospital (just after about 5 police officers arrived at the hospital to take a look at me). Besides physical injury, great psychological harm was done to me. I have been called: A moron, "cocksucker", etc. I have never been read my rights or presented with a charge. All I know is that I need to appear in Court in September.

It is especially offending to me because I am not a criminal. I am 27 years old and have never been arrested. I am a political science and sociology student at UIC, a straight A, honor student. I am a community organizer and a social volunteer. I never had to deal with Police brutality or anything like this in my life. I am in complete shock and in need of help.

Today I will attempt to find a lawyer to take my case into court. My friend decided to do the same thing, his injuries actually may be worse then mine: head injury, bruises on his face and all over the body. What was suposed to be a fun concert ended up in a horror for us. We will seek justice, therefore it is our hope you will let the people know. I still have my torn up clothes, bearing witness to yesterday's events. My clothes and bruises are fortunately not the only witnesses, as many people have already expressed their hope to become witnesses in this case, as bystanders were completely shocked by this violence. Currently, I have a minimum of 3 witnesses.

P.S.
I am a prominent member of the Polish community. I am a president of Independent Student Organization (Translation from Polish, our real name is: Niezalezne Stowarzyszenie Studentow, Niezalezni.org) I have organized over 50 concerts and art shows for the Polish community in Chicago. The biggest was "Juwenalia", Polish student summer festival. Over 1000 students attened this 4 day festival, where 12 band played life, among many other attractions. I am well known in the Polish community, especially among students, it is my hope that this status will help my case. I am also a webmaster of a well known social networking website: Niezalezni.org (connected to the student organization). I attend to blog about this case on a daily basis, I expect thousands of Poles living in Chicago to follow this story.