Remembering the start of WWII and the day before it started 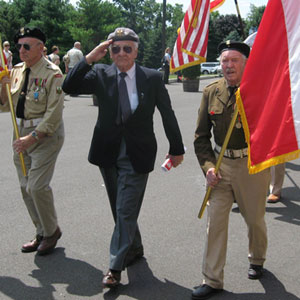 World War II began when Adolf Hitler ordered the military forces of Nazi Germany to invade Poland on the morning of September 1, 1939.

His blitzkrieg was a new and barbaric method of waging war which made civilian men, women and children just as much a target as any military one.

It was also a war of deception, disinformation and falsification for which the German Ministry for Propaganda became notorious.

The Downstate N.Y. Division of the Polish American Congress will commemorate the anniversary of this tragic event with a special memorial mass at St. Ladislaus R.C. Church, 18 Richardson Place, Hempstead, N.Y. Polish war veterans and survivors will attend and take part in a reception that follows.  The public is invited.

In the months preceding WWII, the fear of Germany’s military power instilled a spirit of appeasement in Europe.  But Poland stood firm.

Poland became the “First to Fight” the Germans and fought them longer than anyone else. 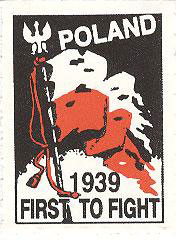 It was Jozef Goebbels, the head of the German Ministry for Propaganda, who stated, “Don’t tell a little lie; no one will believe it.  Tell a big lie and everyone will believe you.”

And it was against Poland that Goebbels first put his cynical principle to the test.  He accused Poland of starting the war and claimed the German invasion was a defensive act by Germany in response to Polish aggression.

That “big lie” against Poland came the day before the invasion on August 31st. To make Poland look like the aggressor, the Germans staged a mock raid on one of their own radio stations – the station at Gleiwitz.

Germans cunningly put on Polish uniforms, broke into the station and sent out an anti-German message that gave the impression Poles were attacking Germany.  To give their deception a look of authenticity, they shot a German convict they had forced to wear a Polish uniform. They left behind his corpse and announced it was a Pole shot by the Germans defending themselves against the Polish intrusion.

“And it wasn’t only the German liars who waged war against Poland,” said Michael Preisler, a Polish Catholic the Gestapo arrested in 1941 and sent to Auschwitz when he was a prisoner until the war ended.

“Just two weeks after the German attack, the Communists of the Soviet Union invaded from the East.  They were called ‘Masters of Deceit’ and with good reason.”

Even though the bombs and the bullets eventually stopped, the anti-Polish falsehoods did not.  It seems they had taken on a life of their own and continue even to this day.

As co-chair of the Holocaust Documentation Committee of the Polish American Congress, Preisler devotes much of his time attempting to correct the repeated misstatements he encounters about that period of history in which the Germans almost killed him.

The irresponsible accusation he hears the most and demands so much of his time to rebut is the constant reference to German death camps as “Polish” death camps.
“It’s as if the media want to exonerate the Germans from their guilt and blame the Polish people for the German atrocities,” he said.

Does such Holocaust dishonesty instigate prejudice against his ethnic group?  Preisler thinks so.

He cited the case of a well-known Protestant minister from Texas who authored a book accusing Polish people like Preisler of  building the ovens of Auschwitz to burn Jews in them.

It was the most “ridiculous” thing Preisler says he ever heard.  “The largest group murdered in Auschwitz were Jews.  We were the second largest group.  This minister was blaming Catholics like me for the crimes the Germans committed,” he said. 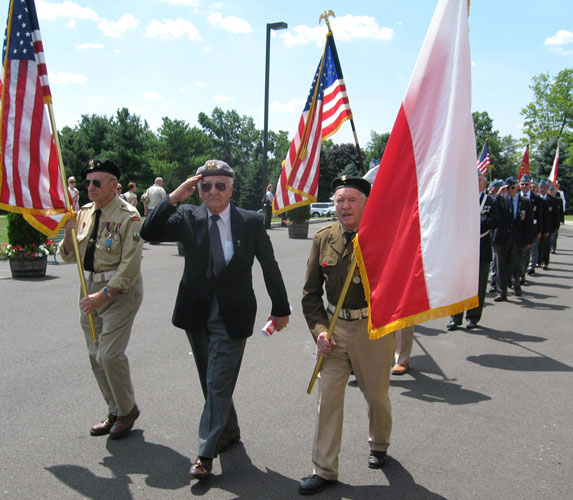 Polish Veterans mark Polish Soldier’s Day at the Shrine of Our Lady of Czestochowa, Doylestown, PA.
Because of the pressure Preisler’s committee exerted, the minister removed the fraudulent statement from the book.  “But by repeating such nonsense he undoubtedly was told by someone else, he needlessly tarnished his own credibility and reputation,” said Preisler.

Another version of such anti-Polish libels is the claim that Poles asked the Germans to set up concentration camps in Poland so the Poles could watch the Jews be burned.

“When they make these false accusations they are very careful to make sure nothing is mentioned about the fact Poles like me were also prisoners in these camps,” said Preisler.  “It’s a malicious attack and its intent is clearly to deceive the American public.”

Commemorating the start of World War II is a somber occasion for New York’s Polish Americans.  “It also should be for everyone else.  It was a tragedy for the entire world and historians should pledge to record it accurately and honestly,” he said.