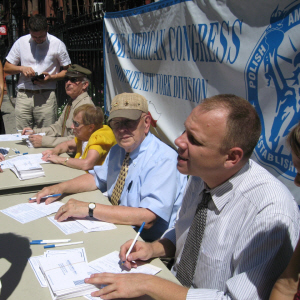 “We can complete your registration right now if you could just remember the last four digits of your Social Security number.”

Chris Rybkiewicz (right) urges a member of the St. Stanislaus Bishop & Martyr Church on the lower East Side of Manhattan to try to recall this required information for her New York State voter registration form.

Rybkiewicz is chairman of the Voter Registration Committee of the Downstate N.Y. Division of the Polish American Congress.

His group has been in action since early April throughout New York City and Long Island with another eight weeks left on its schedule.

Shown with him are (from right to left): Richard Brzozowski, secretary of the Congress and also head of its newly-formed Long Island Chapter; Marion Brzozowski and Zygmunt Bielski, scoutmaster of the Polish Scouting Organization Harcerze.

Historic St. Stanislaus B&M Church was the first Catholic church to serve the Polish American community of New York.  It was built by Polish immigrants arriving in the city in the latter half of the 19th century.

The visit of the Polish American Congress to the church coincided with ceremonies held there to commemorate the 64th anniversary of World War II’s Warsaw Uprising in 1944.

The Catholic boy and girl scouts of the Zoska troop even succeeded liberating a German concentration camp holding 350 Jews and set them free.

The Warsaw Uprising of 1944 is often confused with the Warsaw Ghetto Uprising of April, 1943 in which the Germans murdered 20,000 Jews.

Polish scouts from today’s Harcerze participated in the commemorative ceremonies at St. Stanislaus.