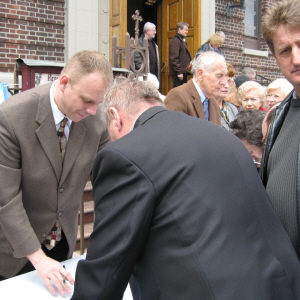 Brooklyn, N.Y. ..To encourage their participation in the upcoming presidential election, the Polish American Congress took its 2008 Voter Registration Drive to Williamsburg and the members of Our Lady of Consolation Church.

Shown above are some members of the committee as they help the parishioners complete their Board of Elections registration forms - Chris Rybkiewicz (left) who heads the registration unit and Frank Milewski (center),  president of the Downstate N.Y. Division of the Congress.

As they arrived in New York’s Ellis Island at the start of the 20th Century, many of the immigrants from Eastern Europe chose to settle in the Williamsburg  section of Brooklyn.

Among them were the Poles who made their parish church, Our Lady of Consolation on Metropolitan Avenue, the center of their communal life.  They slowly applied for U.S. citizenship and became part of the democratic process as they went to the polls and voted.

Another wave of Polish immigrants came to Williamsburg at the end of World War II after Nazi Germany destroyed Poland and left it in the hands of the Communists.  Still more arrived during the time of the Solidarity movement of the 1980’s and the clashes with the Marxist regime which Moscow imposed on Poland.

“Having lived for many years under Communist repression and the German occupation, many of the Poles who become American citizens understand and appreciate their right to vote in free and democratic elections,” said Rybkiewicz.