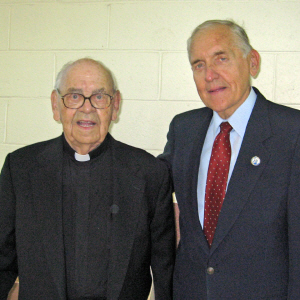 Emeritus of St. Hyacinth Church of Glen Head, N.Y., welcomes the president of the Downstate Division of the Polish American Congress, Frank Milewski, at the parish’s special observance of its 100th Anniversary.

The yearlong commemoration began with a concelebrated mass and traditional Polish Corpus Christi procession conducted by the present pastor, Msgr. Richard Kopinski, on Sunday, May 25th.

Located on Cedar Swamp Rd.- Route 107, St. Hyacinth’s will always be remembered for the public tribute it paid in the1980’s to Poland’s Solidarnosc (Solidarity) workers’ movement which eventually brought down the Communist system in Eastern Europe.

Every day, thousands of American drivers using the road were reminded how the Polish workers were engaged in their bitter struggle for freedom and independence by the huge Solidarnosc banner St. Hyacinth’s displayed on its property.

Only after Poland won its fight for human rights and dignity was the banner finally removed.

“But that special Polish spirit of dedication and devotion is just as evident today as it ever was.  You can immediately sense it whenever you come to St. Hyacinth’s,” said Milewski.