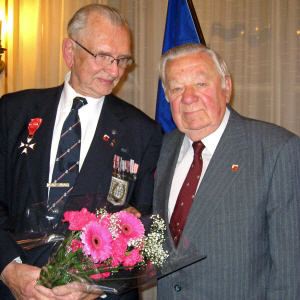 Instead, they joined Poland’s underground resistance, the Armia Krajowa, and spent most of their time fighting the German army of occupation.

Here they are shown at the Polish Consulate in New York City as the Republic of Poland honored Madejski with its Officer Cross of Merit for his many contributions to the cause of a free and independent Poland during and after the war.

Dr. Waleszkowski is a neurological surgeon in Lodz, Poland and came to New York to be present at the ceremony paying tribute to his longtime friend.

Poland’s underground resistance was the largest and most effective anti-Nazi resistance in all of German-occupied Europe.  Madejski became part of it right from the beginning in 1939.

During the Warsaw Uprising of August, 1944, Madejski and Waleszkowski were members of the Scout Troop Zoska.  At the height of the battle, the scouts of Zoska reached the Gesiowka German concentration camp inside the city and liberated 350 Jewish prisoners.

For their heroic act, Israel has honored the Polish scouts of Zoska at its Yad Vashem Memorial in Jerusalem.

There, those who went out of their way to rescue Jews during the Holocaust are remembered as “Righteous Among the Nations.”  While many individuals from various countries are given this distinction, by far, the largest number of them are from Poland.