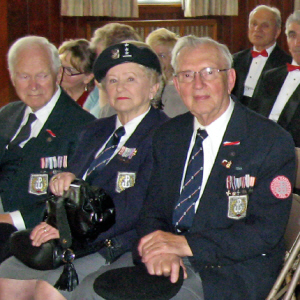 The document was the first written expression of liberty and sovereignty on the European continent ratified on May 3rd, 1791, just a few years after the United States Constitution was adopted.

Seated at the head of the audience were (from left to right) Z. Paul Wos, his sister Wanda Lorenc and Michael Madejski. All three fought against the Germans in the Warsaw Uprising of August 1, 1944.  Also, Frank Milewski, President of the Downstate N.Y. Division of the Polish American Congress; Hon. Ralph Suozzi, Mayor of the City of Glen Cove and Zbigniew Kurjanski, President of the Polish Home of Glen Cove.