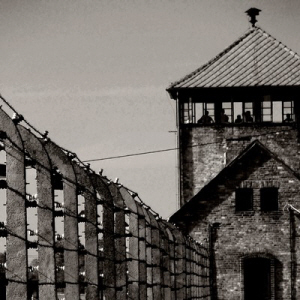 “Nowhere else is Holocaust history as distorted and misrepresented as it is about Poland.”

This disturbing fact is the main reason Michael Preisler, a Polish Catholic survivor of Auschwitz, does not allow himself to stop his nearly thirty-year crusade to see that the American people are told the truth about the Holocaust.

Most of the misrepresentations about Poland are from just plain ignorance.  But he never discounts the possibility of willful
malice, either. Whatever the reason, education is essential.

Preisler visits many schools to tell students about his personal experiences during the German occupation of Poland in World War II.  His account of what went on behind the barbed wires of Auschwitz is something these youngsters are bound to remember
the rest of their lives.

Now, as co-chair of the Holocaust Documentation Committee of the Polish American Congress, he has gone one step further.  Thanks to generous donations from individuals who are just as concerned about Holocaust dishonesty as he is, Preisler’s committee has purchased a thousand copies of Arthur Hempel’s  “Poland in World War II.”

He intends to use the books to fill what he calls a “gaping hole” in the average American’s understanding of the Holocaust and the brutal terror the Germans used against the people of Poland.

It did not take long to find someone with this gaping hole and in "dire need” of one of  his books.  To his astonishment, it happened to
be a Catholic publication from Toronto, Canada, the Catholic Register, "which should have known better,” and revealed a “deplorable misunderstanding of the most basic facts of World War II history.”

Instead of reporting that Poland became the first victim of Nazi Germany when Hitler invaded in 1939 to start the war, the Register wrote that Poland actually sided with the Germans and the Nazis.


Being a Catholic,  Preisler was “disappointed” that a Catholic periodical would be so misinformed about a country as Catholic
as Poland is.

“It just shows how much influence the steady stream of anti-Polish falsifications we see today can have on creating popular misconceptions, even on those we expect to know the facts,” he said.
Contact:  Frank Milewski (718) 263-2700 – ext. 105