Reviving Jewish and Polish memories of the Holocaust 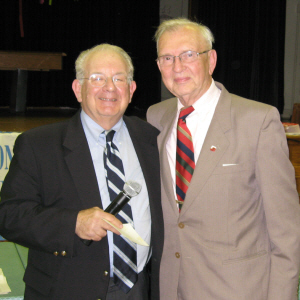 William Donat (left) was guest speaker at the April meeting of the Downstate N.Y. Division of the Polish American Congress held at the Polish & Slavic Center in Brooklyn.

Shown with him is Michael Madejski, a member of the Polish American Congress. who was in the audience listening to Mr. Donat’s harrowing story of how Polish Catholics helped the little Jewish boy he was survive the Holocaust by hiding him from the Germans.

When the Germans were getting ready to liquidate the Warsaw Ghetto in April 1943, Donat’s parents entrusted him to Catholics outside the Ghetto who took him in as their own.  The Polish Underground -- most likely Zegota, the organization Poland's Government-in-Exile created to aid Jews -- later moved  Donat to an orphanage supervised by Catholic nuns.  He not only survived the war but was eventually reunited with his parents.

Madejski’s major wartime experience took place in 1944 during the Warsaw Uprising.  As a boy scout of the Zoska troop, he and his fellow scouts were able to beat back the Germans and to liberate 350 Jews from the Gesiowka concentration camp inside the city. Israel’s Yad Vashem has honored the scouts of the troop for their heroic act.

Mr. Donat is a member of the Hidden Child Foundation. Mr. Madejski is president of the Armia Krajowa Veterans Assciation of New York.

Officials of the Downstate N.Y. Polish American Congress thank William Donat for telling his riveting story to a spellbound audience at their April membership meeting.