"Do Not Quench the Spirit" - "Ducha nie gaście" 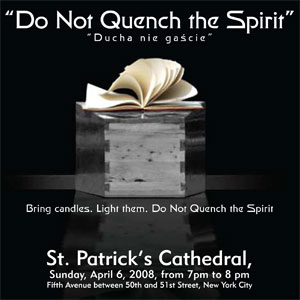 The Consulate General of Poland in New York has the honor of inviting you to The Annual Concer in Memory of Pope John Paul II: "Do Not Quench the Spirit" - "Ducha nie gaście"

Bring candles.
Light them.
Do Not Quench the Spirit.